For the past few 35+ years, Cindy Ross has found peace, happiness, and a sublime sense of contentment while walking and cycling the endless trails that are sewn into the fabric of the North American continent. She has crossed the 2100-mile Appalachian Trail as a single woman penning and illustrating her first book, A Woman’s Journey on the Appalachian Trail, which has been in print for over 30 years and has become a hiking classic. Then she tackled the 2600-mile Pacific Crest Trail through the Sierra and Cascade Mountains with her husband, Todd Gladfelter and wrote and illustrated, Journey on the Crest. (The Mountaineers Books)

Her 6th and latest book, Scraping Heaven- A Family’s Journey Along the Continental Divide (McGraw-Hill) is the rousing adventure of a family’s incredible five-summer, 3100-mile trek over the rooftop of North America. They used llamas as kid carriers for their children, Sierra and Bryce, and as packers to carry supplies and diapers across the Rocky Mountains. The entire journey took 5 summers, hiking 500 miles a shot. The last stretch through New Mexico is all desert, so they traded their llamas in for tandem mountain bikes and pulled trailers full of 100 pounds of gear for the last 650 miles down to the Mexican border.

Cindy had her formal education in Fine Arts Painting, attending the Pennsylvania Academy of Fine Arts in Philadelphia. She illustrated four of her books. She lives along the Appalachian Trail in Pennsylvania with her husband, Todd in a log home they built themselves from raw trees. They grow much of their own food on their rural property.

As a family, besides the Continental Divide Trail, they have traveled to Asia, Africa, South America, and Europe hiking, cycling and paddling and have traveled extensively throughout the US.

Cindy has appeared on Philadelphia’s NBC “The 10 Show;” Philadelphia’s ABC “Sunday Live”; NYC’s CBS News “Up to the Minute;” NYC’s Channel 11Warner Bros., “The Morning News,” and Denver’s CBS. Her family and llamas were featured on a half-hour show on Animal Planet, called “Pet Story.”

Her latest endeavor is a new book titled, The World Is Our Classroom: How One Family Used Nature and Travel to Shape an Extraordinary Education (Skyhorse Publishing, NYC- September, 2018) on how she alternatively raised educated her children. One of Cindy’s current passions is spreading the word on how important the natural world plays in educating our children, and how to get them outdoors. Cindy hopes to share her expertise gleaned from 26 years of mothering as a writer, an outdoor adventurer and a home-school facilitator, through presentations and workshops. She can also relay the nuts and bolts information on how to help starting parents get their families outdoors but also reach higher goals of outdoor adventuring and take a more active part in the education of their children.

Todd and Cindy attended a ten-day log building school in northern Minnesota, the Great Lakes School of log Building, to learn to build their own log home from scratch. The class took them through every step of construction from felling trees, to chainsaw carving notches, to putting on the roof. They used a lot of salvage in its construction; Cindy’s uncle had a demolition company, so their handcrafted home cost only $20,000. The bricks in the chimney were once street pavers; the slate roof was taken off a building scheduled for demotion that they hand scalloped, and most of the windows were recycled. They taught themselves how to do every job—laying the block foundation, roofing, wiring, plumbing, building a chimney, and tiling the floors. Todd picked up the skills from books and helpful friends. With a background in fine furniture making, Todd hand-crafted all of their furniture, including the Victorian screen doors.

Cindy has written a book entitled, “The Building Years- Building a Home While Building a Marriage,” with 70 ink/line illustrations. It is yet to be published. 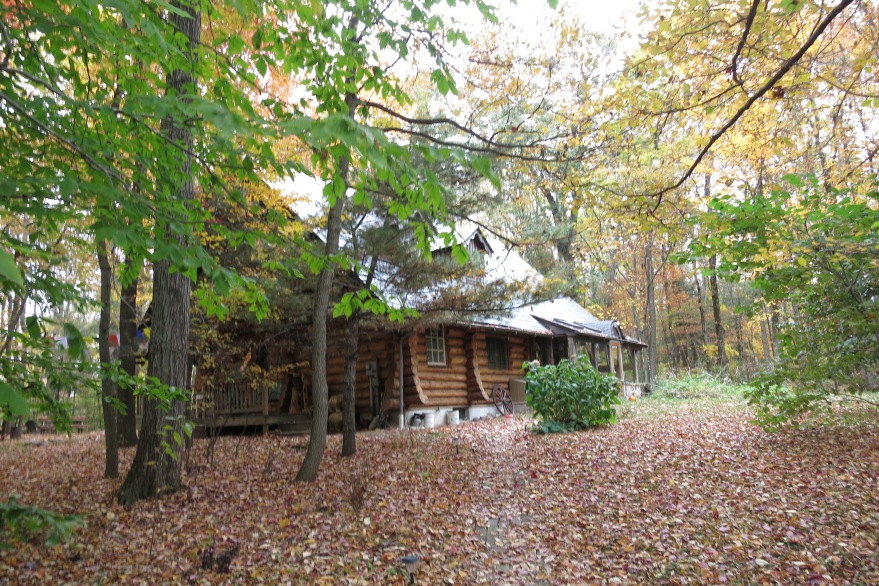 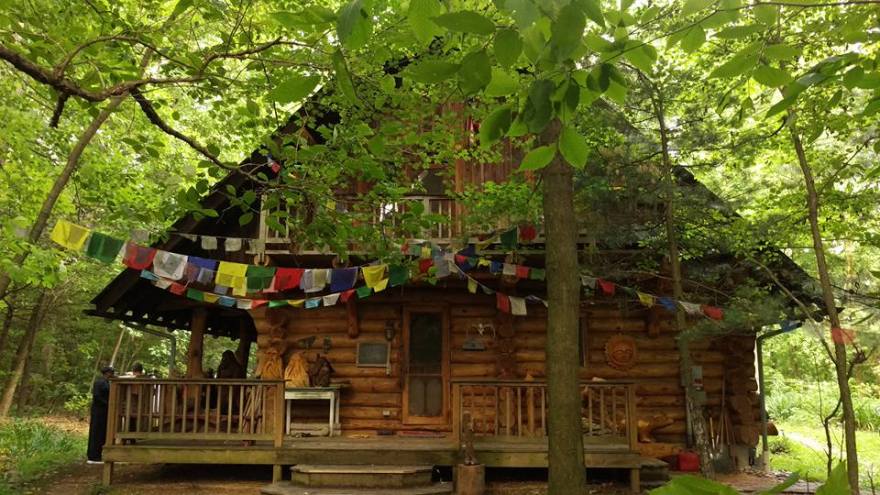 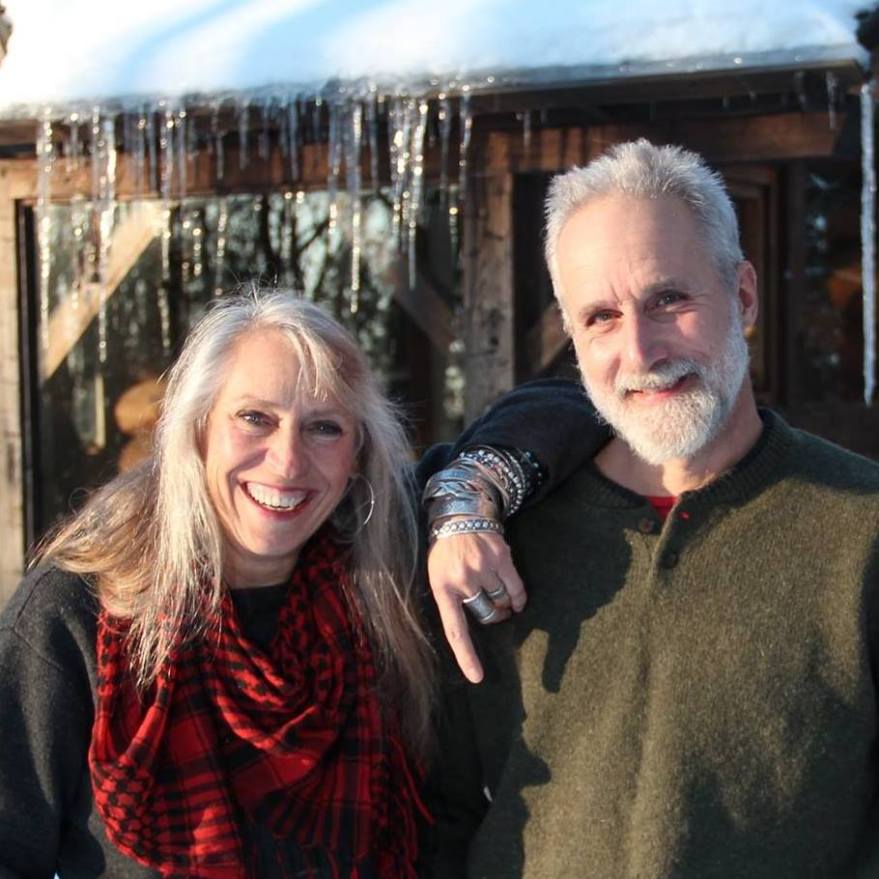 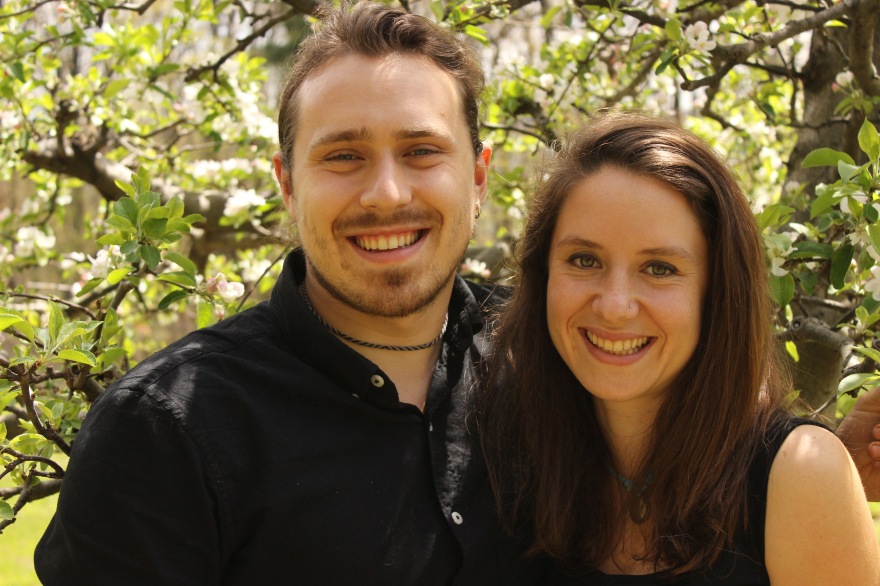