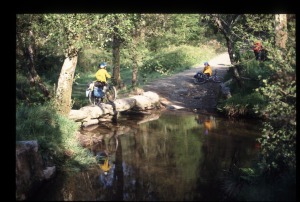 Last night, Todd and I decided to slough off our work responsibilities and watch a movie- but this wasn’t just any movie- it was the story of traveling along the Way of Saint James- the Camino de Santiago- a 1,000 yr old pilgrim path that stretches from the Pyrenees on the Spain/France border to the Mediterranean Sea. What a great film. My opinion was colored from the fact that we led our children across this path when they were in their teens- on bikes, and it was a fantastic experience. There is a scene in the film where the father is asking the son why he is abandoning his doctorate pursuit in exchange for this experience and he says, “Morocco, Nepal, India, Papa New Guinea- I want to see it all.” and he tells his father that you “don’t choose a life, you live one.” 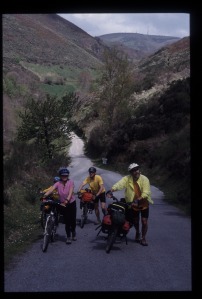 I must admit, I cried multiple times during the film, for the sheer poignancy of it, to the fact that I recognized summits, hostels, bridges, the swinging incense burner in the cathedral at the end, the stamping of our passports- it brought back fantastic memories. And it made me hop on my bike and ride this morning and wonder if another long journey might be brewing in the recesses of my mind. At the very least, it made me realize how happy I am that I raised my children with this philosophy, that I was not that parent who wanted their child to stay put and live a conventional, falsely secure life, one without any adventure (I’ll be whining about this fact towards the end of the year when my daughter moves to China or Mongolia to teach English for a year and I’m in pain from missing her-THEN I might regret raising her this way…OR , just save my money and buy multiple plane tickets to go visit her- China is a big country to check out!) Anyway, check it the film and my story- we rented the film at Red Box but Amazon is selling, even used already. And here is a link to my story on our Camino trip that appeared in multiple publications- this one was in The Denver Post.

You +1’d this publicly. Undo

The Way is a 2010 American drama film. It is a collaboration between Martin Sheen and his real-life son Emilio Estevez to honour the Camino de Santiago. It is a powerful and inspirational story about family, friends, and the challenges we face while navigating this ever-changing and complicated world. Martin Sheen plays Tom, who comes to St. Jean Pied de Port, France to collect the remains of his adult son , killed in the Pyrenees …