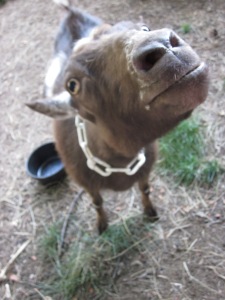 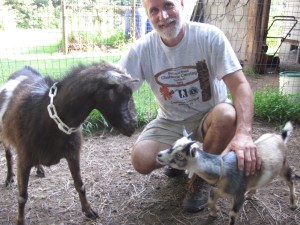 When my children went off to college and my groom asked me if I would “follow him around” and I said, “WHAT?” in shock and horror, needing to hear that request again because I could not believe my ears…he rephrased it, “I want you to come with me while I do my chores,” I said as sweetly as I could, because that really was a very sweet request, “I don’t think so, honey. I will get you a dog to do that.”’

So when my niece, Ashley Mikulsky who is PR for the Animal Rescue League in Reading told me that two baby goats were at the shelter and needed a good home, Bryce and I thought they would make the perfect Father’s Day present as well as Todd’s birthday present, which was two days earlier, something that could fulfill his wish of being followed him. (We are not really dog people, or so we claim…we’ve actually never had one- Todd likes animals to be able to take care of themselves for at least a long weekend and dogs seemed too needy). 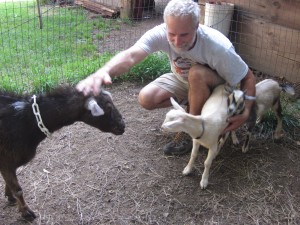 Now those of you that know us well know that we have a boy, Leo, the very best goat on the planet, who has tremendous personality and goes on hikes with us in the woods, up to three miles at a time and stays RIGHT with us, never chases a deer like a dog would. But when Todd said recently that Leo was getting old and may die in a few years, Bryce and I knew we needed to prepare for that day, and what better way than to bring in some young blood. 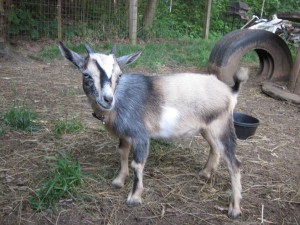 But Leo is not too chill with his pen mates. He herds them around with his hard head, they all compete over food.  Todd says Leo is eating too much (the babies eat grain) but Bryce and I seem to think he has slimmed down. (Some of you may know that he used to look as if he swallowed two basket balls that he carried on either side of his spine.) 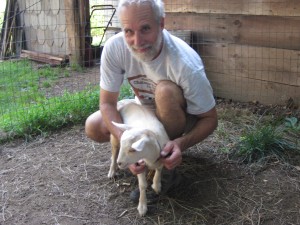 Todd says Leo is stressed- the baby boys compete for space on the spools which they like to climb onto and stand. There are two spools and the babies only hang on one  together so there is still one for Leo but he chooses not to be up there now.

Leo has beaten a trail alongside the fence from pacing, like a caged wild animal. Bryce and I try to take him out more and give him some relief from the rug rats. We think it just takes some getting used to, like any change. 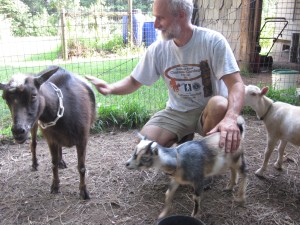 Todd whines that they take up more time. But as the wife, I figure that is a good thing. I like to keep my man busy. We all know that German boys thrive on work and they need to be out of the house doing it…two baby goats to care for makes that possible.

So don’t feel too sorry for Leo or Todd, you guys. Change is good. Work is good. Keeping busy is good. New challenges are good. It keeps things fresh. And if we aren’t smart enough to know that and create change for ourselves on purpose, then it is a good thing to have a wife and a son that makes that happen for you!

2 thoughts on “Is Change Good for an Old Goat ?” Leave a comment ›