“Another one’s coming!” First Mate Kirk Johnson announces as he glances over his shoulder at the wall of water swelling behind our aluminum boat, Voyageur II. Captain Mike Hurley grips the stainless steel wheel and when he feels the push of the seven-foot wave, eases off the throttle to surf it. In the stern, a few passengers hang over the rail, “feeding the fish.” My family stands in the cabin, wide-eyed and white knuckled gripping the rail, amazed at the turbulent show enfolding on Lake Superior.

We are getting ferried around Isle Royale National Park, one of the smallest, least visited and most remote national parks in the system. Captain Mike is taking us from the east side at Rock Harbor, to the west side at Windigo, and is dropping us off to begin a four-day backpacking trip across the island’s backbone.

The waves toss the Voyageur II around like a toy boat and Captain Mike works non-stop to keep her on course. I see him rapidly turn the big 30 inch stainless steel wheel to the right, then quickly reverse to the left. There’s a lot of play in the wheel, he tells me and he has to hang on and continually steer.

The bow of the boat raises up seven feet in the air after she pops out of a trough. The waves come in sets of 2-3 and the encroaching masses of water are not easy to miss.

Waves behave differently here in this monstrous great lake then the ocean. They peak and crash and slosh back and forth as in a bathtub. The oscillation is called a seiche, a French word meaning “to sway back and forth.” Fetch is another occurrence that comes into play, on both the ocean and a great lake. It is the length of water over which a wind has blown. The longer the fetch length and the faster the wind speed, the larger and stronger the wave will be. Long fetches can produce high energy waves that can be massive. Our captain and his first mate watch for these with serious steady eyes.

Eight foot waves are the cut-off that Captain Mike is theoretically allowed to transport passengers through. If something should happen in seas over eight feet, he could lose his license. He’s not fearful of capsizing, however, as this sturdy 63 foot all aluminum made-for-fishing boat could take seas over twenty feet. 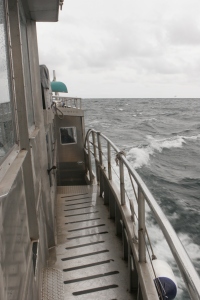 It is estimated that between 6,000 and 10,000 ships have sunk or been stranded since the early 1800s on the Great Lakes, with Superior being the deadliest. In the worst storm ever recorded, twelve ships sank, thirty more were stranded and at least 248 sailors lost their lives.

Seven foot waves are workable but things could change quickly out here.  The marine weather radio just upgraded to 30 MPH winds and eight foot waves. Seven feels pretty darn exciting. I swallowed a few motion sickness tablets on the start of our 4 ½ hour voyage but they don’t guarantee anything.

Out of the three ferries that service the island, The Voyageur II is the only ship that circumnavigates the island and drops off hikers at various campgrounds.  This is because of its long history as the mail boat which brought news and supplies to the commercial fishermen, copper miners and cabin owners and now the national park service. Today’s Voyageur makes three round trips a week. It can shuttle forty-two people and burns 180 gallons of fuel on a round trip.

In the hold of the Voyageur II, a sign reads, “Coffee- 1st cup free for adults. ” The donation tin next to it, careens to the floor, as we rock and roll in the surf. Part of the First Mate’s job on board is to sell  candy and other snacks to the passengers but right now he is busy in wheel-room. We can’t get up and walk anyway without landing on someone’s lap.  Another job of Kirk’s is to check in with the passengers to see how they are doing, prescribe fresh air or another location on the boat if they’re about to be ill. It’s also the first mate’s job to clean up the puke, so it is in his best interest to keep us healthy. But his warmth is endearing as he sits down next to each person, puts his arm around young and old alike and genuinely expresses care and interest on our well-being.

When we arrive at Windigo and bade our fearless captain and his first matt good-bye, Mike still isn’t certain that he will make it all the way back to Grand Portage, Minnesota. He may have to turn around if it doesn’t feel safe.

“Sometimes, I have to just sail through the islands and poke my nose out onto the lake and see for myself what it is like, see if it is do-able before I make a decision. Because you never know until you are out there. I can get out there two miles and turn around.” 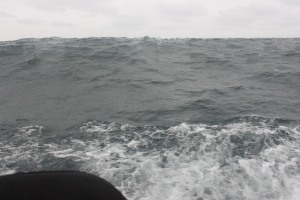 After our backpacking trip is complete, and we return to Rock Harbor, we meet up with Captain Mike again. He tells us that the waves crested at eight feet after he dropped us off, and multiple passengers were but, obviously, they made it safely. Today, Rock Harbor and Lake Superior is a like a sheet of glass.

Inside the Voyageur II, Mike gives me a tour, now that the ship is snug in the quiet harbor.

The Voyageur II has multiple instruments to guide us to safety- 2 GPS’s , a depth finder, and radar. The boat drafts at four feet, but Mike says he “panics” at six.  Behind the wheel and the instrument dash, is his bed, where he sleeps when in port. Kirk sleeps down in the hold next to the kitchen and head.

This is only Kirk’s first year at sea, after living a life in the forest as a lumberman and contractor. He decided to switch it up and try sailing and he loves it. Captain Mike, on the other hand, has been sailing the Voyageur II ever since he was a teenager. He loves “playing in the puddle,” as he affectionately calls Lake Superior…enough to be away from his family and Wisconsin home for six solid months out of the year. From the end of May until the middle of October, he must rely on his wife and kids to come visit him if they want to be together. He rents a small cottage at Grand Portage, Minnesota where he rests in-between his three weekly runs.

Mike tells me stories of bad storms on the lake, when the lightning bolts spear the water with terrifying purple arms of light, striking all around the boat. He’s never been struck by lightning and doesn’t know a captain or a ship that has.  That’s a good thing as the Voyaguer II is an all-aluminum boat. “The rain storms don’t bother me,” he admits, “gale winds do.”

He’s neither proud nor stupid to not turn around if he’s feeling unsafe.  He’s been forced to turn back at least once a season, and once the ship was stranded at the harbor for a solid week in August when the whole lake was in lock-down. Hikers make pre-arranged reservations to be picked up at particular campsites with Mike. At the remote spots, he fore warns them, “If the weather gets bad, stay put. I’m coming for you, don’t leave.”  They sometimes panic, are afraid they will run out of provisions, and that Mike has forgotten them and so they leave.

Mike usually tries to make the pick-up again at 4 A.M., in the middle of the night, so he can get back to the mainland in time for the next shuttle. Mike has no way of knowing where they are and cannot communicate. There is no cell service on the island and once he is 20 miles from the mainland, even the radio does not work. Decisions often have to be made between the captain and his first mate on which move to make next.

Fog does not bother the captain. Then he sails by instinct and looks for trees as he encircles the island. Interesting to me, Mike is fearful of the part of the lake that reaches over 800 feet.

“I think of that when I sail over it and I get scared of capsizing,” he smiles.

“But you could drown in seven feet,” I remind him and since Lake Superior is so cold, it wouldn’t take any time at all to get hypo-thermia.

Sailing across Lake Superior or even around Isle Royale could be easy, calm, even a sleepy experience, or you can rock and roll in seven-foot waves and it can be defined as a major moment in your life. We all have our fears and we passengers of the Voyaguer II are very glad that Captain Mike does not have many. He makes sailing the often wrathful seas of Superior feel like “playing in a puddle.”