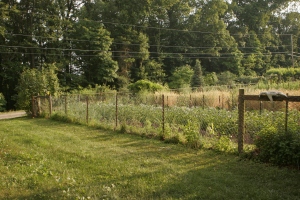 The other day we were weeding the garden when I noticed that a row was eaten down by the resident groundhog.  It had figured out how to climb our garden fence. “Do something,” I pleaded with my husband. I was thinking along the lines of raising the fence higher. Instead, he caught the mother in a death trap, her teats swollen and leaking milk. The five babies were left shivering with fright, seemingly unable to distinguish which greens to eat. Each was caught in the trap, one by one. My husband, who only had a pitchfork in his hand, cornered the father inside the garden.

“Doesn’t it bother you?” I questioned him.

“They were eating the peas.”

Perhaps this attitude is left over from “survival of the fittest,” one animal against the other. Maybe it’s about providing for your family, like shooting wolves that eat your sheep. You’re occupying the same niche and competing for the same food. That’s how the natural world works. One gets it and one doesn’t. It’s people and ground hogs competing for peas, in my husband’s eyes, regardless of how that is accomplished.

Everyone draws their line on where they value life at a different place. Some lines encompass small, young, fuzzy and cute creatures. Others shoot cats when they are bored of hunting and see no game. Then there’s the lady who missed running over a magnificently colored rattlesnake on the road near out house. She slammed on the brakes, threw the car into reverse, and finished the deed.  “Got it!” she triumphed. It was not in her backyard, now was it threatening her. Snakes aren’t cute and fuzzy but they are so worthwhile in the circle of life. So do we work at eradicating a species because we think it is evil? Where is the balance?

Yet I recently heard that the firemen in Allentown, PA were called to rescue baby goslings from a storm drain. Dressed in sixty pounds of gear, these manly men answered the call and happily saved their little lives, for they mattered.

Why do we make exceptions for one species and not another? Does it only have to do with convenience, location, territory, or fear? In another place and time, those geese may be considered a nuisance, the snake valuable, and the baby groundhogs charming.

On one hand this issue seems like a small thing…unwanted pests. But when looked at closer, it may say something bigger. Random violence has become part of our culture, our entertainment. It’s about video games where nothing really dies. Every life we take, may take something from us.

“I bet he is already there,” I assure him.

As a teen, he still relocates spiders outside when he finds them in the house.

Maybe it’s a mother’s thing. I feel it may be our responsibility to care a few deeper levels and try to balance out the insensitivity. Perhaps this killing diminishes our ability to care, to emphasize, to learn how to co-exist. Perhaps we need to instill in our children to value all life a little more, or the next generation may have hearts shrunken to Grinch-size proportions.

I wish I would not have taken the easy way out and left it up to my husband to determine their fates. I wish I had insisted on a tact of repel and outwit, not obliterate. I should have demanded symbiosis- the living together of two species in a manner that is advantageous for both. But I have recently purchased a copy of Bill Alder’s Outwitting Critters- A Surefire Manual for Confronting Devious Animals and Winning. Hopefully, it will help us make more humane choices. And when the next family of groundhogs moves in (and I hope they do), we’ll be better equipped to deal with the challenge of living together.

The world may not have missed that handful of goslings, or snake, but surprisingly, I truly miss our groundhogs. There are no longer any brown balls of fur romping across our pasture when I drive down our lane. And the peas no longer taste so good.

(This story appeared in The Bay Journal News Service)