I am nearly as fanatical about getting children away from screens and technology and into the outdoors as Richard Louv, author of Last Child in the Woods- Saving Our Children from Nature Deficit Disorder, BUT technology has its place. Sierra and her boyfriend Eben are in Cheng Du province of China teaching English for a year. They have had to stretch themselves, especially vegetarian Eben who has found himself gnawing on chicken feet and Sierra- chewing on a duck bill and throat (unbeknownst to her at the time). They long for American food, and would be happy with Chinese-American food but it is hard to find. Before, in America,  they would not shop at a Wal-Mart but that is now where they buy their food. (Eben figures the stuff doesn’t have so far to travel at least!) So Sierra got the great idea to have breakfast together (or dinner on her side of the world). She said, “At 10 A.M. on Sunday morning, meet at the computer with french toast and we will share a meal together! So I got up and made the french toast and popped it into the oven to keep warm and wait for that Skype call. IT WAS SO MUCH FUN! My friends ask me if I am scared to have her go to China and a male friend or two encourages me to “cut the apron strings and let her go,” I don’t know how much further she would have to “go” than China to prove she is independent of her mother. But it is things like sharing french toast over Skype that gives my children the courage and the support to travel across the world and carve their own way in life. Gifts like Skype sure help. 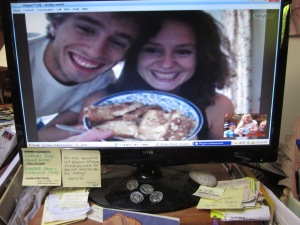 4 thoughts on “French Toast All Around” Leave a comment ›

Leave a Reply to sierragladfelterCancel Reply