The iron chain ‘hand rail’ bolted into the black granite of Rio de Janeiro’s highest peak Pico da Tijuca, is very old. It was laid across this last pitch for the king of Belgium, an avid rock climber, in anticipation of his visit back in the late 1800 s. Steps were also hand-chiseled into the steep slope for the king’s convenience, but he disregarded both and galloped up the sheer rock to the summit like a goat.

As I climb Tijuca Peak for a commanding view of this “Marvelous City,” it is an easy walk-up and a great way to gain height above this most gorgeous city on the planet. The beautiful beaches, bays, harbors, and forested mountains that jut up from the city, lay at your feet like a royal carpet.

Rio’s Tijuca National Park is the world’s largest and only urban national park in the world, encompassing six square miles. You can rock climb, hike, bird watch, cycle, and even hand glide from the mountain tops all within the limits of the city. Then shortly afterwards, dip into the shimmering Atlantic alongside the world- famous beaches.

My guide for while in Rio is Gabriel Morand, a biologist who enriches tourists’ experiences through the local, long-standing “Town Tours,” a private local tour company. Gabe not only informs me about history with stories of the climbing king, but teaches me about nature as he points out brilliant birds, giant lizards, swinging monkeys, fragrant orchids, and interesting trees in the lush Atlantic rainforest.

This vast national park area was completely stripped of trees back in the late 1880s in order to make way for coffee plantations. But visionary Emperor Don Pedro II foresaw the destruction, put an end to it and created a park reserve in its place. Gabriel explains that inbetween this dense forest of spectacular peaks and the sugar white sand beaches, the city of Rio grew. But unlike cities like San Francisco, where the wealthy gathered on the highest slopes, here the rich coveted the beachside and on the slopes the poorest built a maze of stacked block homes with tin-covered roofs called favelas (Portuguese for shanty-town) . When slavery was abolished in Brazil in 1888, the former slaves became homeless and migrated to the hillsides, where they lived off the grid in favelas all these years until the recent police pacification program.

As we descend the mountain, Gabriel points out the Samauma tree called the ‘queen of the forest.’ Radiating from its truck are wide narrow wings much like cedar buttresses. Indigenous Amazonian tribes would beat on the trunks with big sticks to communicate to other jungle tribes via the loud, reverberating sound. He shows me a oneand a half foot long Teju lizard scurrying into the jungle, lacy orchids, purple bromeliads high on the trees, and swinging Capuchin monkeys.

A more typical way to get above Rio for a picture postcard view is take a train ride though the cool forest to the Christ Redeemer statue (Cristo Redentor) on Corcovado Mountain. Christ towers over 1,000 feet high with a span of eighty-four feet from one carved hand to the next. The most famous art deco sculpture in the world, this statue was built over a five-year period during the commemoration of the 100 years of Brazilian independence. Although this iconic symbol of Rio has been welcoming visitors to the city with his outstretched arms for over eighty years, it was recently chosen as one of the new Seven Wonders of the Natural World.

Even more exciting is the cable car ride to Sugar Loaf (Pão de Açucar) mountain, which sits poised on the edge of the Bay of Botafogo. This cable car system is only the third in the world to be installed back in 1912 when equipment had to be rock-climbed up to the summit. We time it right, and are able to witness the most amazing sunset as the sky behind the Christ appears to be ablaze with fire. As night descends, Christ glows whiter and whiter, illuminating the night sky like a beacon along with Rio’s shimmering lights.

A TOUR OF A FAVELA

Historically, favelas are places to be avoided avoid at all costs and Complexo do Alemão favela was among the worst for crime. Even the residents’ friends and relatives had to leave their vehicles and motorbikes outside and hire get a local to deliver them, lest their vehicle get stolen and stripped. It was impossible to get builders to enter so the structures fell into deeper disrepair. There was so much crime that even the police stayed away, for twenty years, until recently.

In 2011, pacifying police units descended onto this fifteen-neighborhood complex, the home of 400,000 people. The five to six hundred drug lords were either captured or fled. A cable car system was then put into place as a means of shuttling inhabitants around the community, to jobs, to schools, and as a way of getting social services to the people. A recycling program has been adopted, a garbage removal program is now in place, pure water is delivered, as well as safe electricity, (which before was tapped into and live-wired). The project was replicated using Medellin, Columbia’s successful ‘pacification’ program as a blueprint. With the coming of the World Cup in 2014 and the Summer Olympics in 2016, timing was perfect for Rio to create such positive change.

Riding high along the two and a half mile system that connects favela hill top to hilltop, it is easy to understand how this area could prove to be impenetrable. There are very few roads as the homes were created by squatters many years ago, who simply built one on top of one another. Very few streets intersect the tangled maze of buildings, only narrow walkways and steep steps. Women hang wash on the rooftops, children kick balls, samba music plays, dogs stretch and snooze in the sun, normal life without the sound of gunshot.

Tourism Director for Complexo do Alemão, Daniel Brandao explains that local teenagers have been hired to digitally map the area to give residents a physical address. The kids hold team competitions across the neighborhoods using their smart phones and GPS’s.

This was not the first favela to be ‘pacified’ and more are slated to be occupied. Although some of the drug lords have fled to other favelas, this hugely successful program here in Complexo do Alemão is a giant step forward. Even though this cable car ride is not the typical way a tourist views Rio from above, it provides a very positive experience and a completely different perspective into the rich fabric of Rio life.

We disembark and wind our way down the now friendly favela neighborhood to enjoy lunch at cozy Point Grill, where traditional Brazilian food is served buffet style while lively samba music plays. When the World Cup is held in 2014 and the Summer Olympics in 2016, Rio will be ready in more ways than one to share all this marvelous city has to offer.

Not far from Complexo do Alemão, is another hillside neighborhood called Santa Teresa, the artisan district, with its cobbled streets, workshops and galleries. Located here is the highest hotel in Rio, the sophisticated and elegant 5-star Hotel Santa Teresa, and just the place to end my “Above Rio” tour.

This historic home turned boutique inn was once the homestead of a wealthy coffee plantation owner, who centuries ago helped create the former forest devastation to make way for coffee trees. This leap of faith to transform the plantation mansion into ‘one of the most beautiful hotels in all of South America’(Conde Nast), resulted in a neighborhood-wide transformation. The forty-four room hotel boasts Brazilian art and design in its décor, inspired by African and indigenous roots.  Tropical gardens surround a natural slate swimming pool, a spa and a superb French restaurant with a Brazilian flair. Upon its opening, shops moved into the neighborhood, as well as other boutique hotels and great restaurants making Santa Teresa another neighborhood success story. 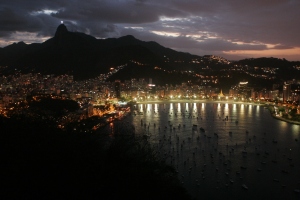 From the hotel’s patio, I can look out over the mountains of Tijuca, the  plantation-turned- national park, all the summits that rise above Rio, and the it’s dazzling city lights. As the Games approach and the city undergoes a face lift, I believe Rio will continue to rise above its issues even after the Olympics and dazzle the world like only Rio can do.

5 thoughts on “Rio de Janeiro From Above” Leave a comment ›