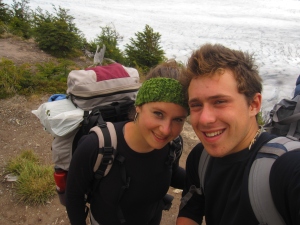 When I first learned I was pregnant, I looked at my husband Todd, and announced, “You will never be first again.” He teared up. I was serious. And I adored my husband, was even accused by some critics of my second book, Journey on the Crest– A 2,600 Mile Walk From Mexico to Canada, that I loved him too much, that it was unnatural.

I would not consider myself a great wife. I am a good wife. A good enough wife. That wasn’t enough when it came to my kids. I am a great mother. As Louisa May Alcott said, “I want to be great, or nothing.”

For twenty-three years now, Todd has taken a back seat and he has grown used to it. (But at least he is still in the car. Some husbands get tossed over the course of the marriage). Although I work on achieving a balance in my life, clearly the kids always come first. Maybe it’s a Mother thing. Maybe it’s an Italian Mother thing.

We saw a father of a friend of our sons outside the drug store today. We asked how his son at college was doing and he said he had just been   home for Thanksgiving, that he hadn’t seen him since he left for school in August and he really had missed him.

“He has a job and is busy so he doesn’t come home. But I was in the garage when he left and I told him to make sure he said good-bye. He realized he was late for his job and he left suddenly, and never came to say good-bye to me. I couldn’t believe he left without saying good-bye. I never see him anymore. It really upset me.”

He almost teared up telling me. We don’t know one another very well and I was a bit surprised for him to be sharing this private moment. Clearly, he was emotionally moved and it just came out. My heart went out to him.

So  I said, “Why don’t you go see your son at college? Take him out to dinner? Its only an hour away! I go down to see Bryce in Philly all the time if he can’t get home. I can’t stand more than two weeks not seeing him!”

“The Cat’s in the Cradle”- lyrics by Cat Stevens

My child arrived just the other day
He came to the world in the usual way
But there were planes to catch, and bills to pay
He learned to walk while I was away
And he was talking before I knew it and as he grew
He said, “I’m gonna be like you, Dad,
You know I’m gonna be like you”

My son turned ten just the other day
He said “Thanks for the ball, Dad, come on lets play
can you teach me to throw?” I said, “Not today,
I got a lot to do” He said “That’s okay”
And then he walked away but his smile never dimmed
And said “I’m gonna be like him, yeah
You know I’m going to be like him”

Well he came from college just the other day
So much like a man I just had to say,
“Son, I’m proud of you, can you sit for a while?”
He shook his head, and he said with a smile

“What I’d really like, Dad, is to borrow the car keys
See you later, can I have them please?”

And the cats in the cradle and the silver spoon
Little boy blue and the man on the moon
When you comin home, Son, I dont know when,
But we’ll get together then, Dad,
You know we’ll have a good time then.

I’ve long since retired, my son’s moved away
I called him up just the other day……..
I said “I’d like to see you if you don’t mind”
He said “I’d love to Dad, if I could find the time.
You see my new jobs a hassle, and the kids have the flu.
But It’s sure nice talking to you, Dad,
It’s been sure nice talking to you……..”
And as I hung up the phone it occurred to me
He’d grown up just like me,
My boy was just like me…………..