(An ‘expert’ teaches the young bewildered and confused student)

On the back of the flimsy wooden disposable chop stick packet at the local Chinese Buffet, there are instructions and diagrams on how to operate them. Sierra and Eben said that there are NO forks anywhere in the country, we’ll have to bring our own in our back pockets or master chop sticks. So the husband and I have been going to the local Chinese buffet for lunch on a weekly basis to practice. Rule is, you’re not allowed to unroll the napkin of western utensils. Don’t touch it. Chop sticks only, included on fried rice. We’ve gotten pretty skilled. So when the son came home from college for study days, we thought we’d try to break him in. He was skeptical at first. Only ever played around with them and certainly never ate a whole meal with them.

Since mom worked in a Chinese restaurant in West Reading for many years, beginning as a hostess at age 15, then a waitress then a cook, she corrected Todd’s form which consisted of wrapping his big muscular blacksmithing fingers around those dainty sticks and getting the food into his mouth anyway he could. The ring finger inbetween the two chopsticks was throwing him off. 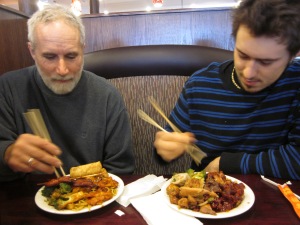 (Notice how swiftly their chopsticks move as they master their technique)

But by the end of the meal, the boys were getting almost  everything on their plates into their mouths. Rice remained a challenge. We think the secret might be, getting low and moving the hand at rapid speed!The little Chinese waitresses were walking by our table smiling at us. And they were delighted to hear at the check out that we were heading to China. 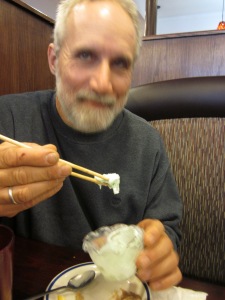 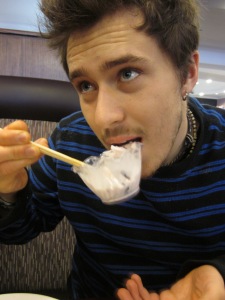 Although my daughter tells me that chunky, fried, sweet General Tso’s Chicken is NOT the kind of foods we can expect to find in real Sichuan China cuisine- coagulated duck blood chunks, webbed duck feet, chicken feet, which they absolutely adore and is sold by the bagfuls in Walmart like beef jerky, is more like it. No one knows where the white meat of the chicken goes- probably to the emperors in the palace somewhere. The common folk never see it. The other night out for dinner, they found a rooster waddle (chunk of waggy neck flesh under its head) and a rooster comb (jagged headress) in their food. Yeah . Yeah. Oh, and on the street, you can buy skewered sparrows with bulging eyes, dried up and roasted.

Sierra and Eben also claim that for them, diarrhea is just an accepted way of life. We might all be coming back with a little less of us.

12 thoughts on “Getting Ready for China at the Local Chinese Buffet- OR NOT!” Leave a comment ›