Paddling the 100 mile Wilderness Trail from top to bottom in the Everglades National Park, is called “the last great wilderness experience in Florida.” That statement alone was enough to lure me in.

My children, age 22 & 20, were very interested in accompanying their parents on a vacation over their winter break, if we “did something epic.” Epic is very good in our book. It makes for large living, high adventure and lasting memories. Auto touring the Everglades wasn’t as attractive as paddling the entire 100 mile Wilderness Trail. The Everglades are a watery world. How can you do it right in a vehicle? The goal of travel, is to become connected to a place and have it become part if you. And for that to occur, you have to spend some BIG time there. 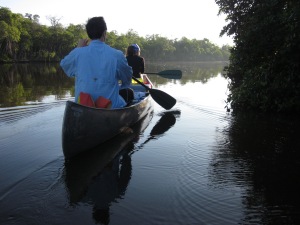 The Everglades are famous for their grasslands and are nick-named “River of Grass.” But on this trail, in this area of the national park, not a blade of grass can be found. There are bays, rivers, streams, mangrove forests, but no grasslands. However, the infamous pythons are not present in this part of the park so you  need not be concerned with them.

Purchase Paddling the Everglades Wilderness Waterway, (Menasha Ridge Press, 2011); also navigation maps that can be purchased at your outfitter.

There are a handful of outfitters in the town of Everglades City. We chose Outdoor Resorts.  Owner Kenny Brown has been serving boaters for decades. His family has lived in the Everglades for generations and is a tremendous source of knowledge and history.

Kenny operates a comfortable motel where you can stay before your trip begins to aid in packing/planning; and also when you return, to indulge in a luxurious bath after 8-10 days on the water.

Get to the nearby ranger station early to figure out your trip itinerary and secure your desired campsites. You must do it in person. Have multiple alternative itineraries.

Canoes make more sense than kayaks. It is easier to shift positions and move around. Since you have to carry most of your drinking water for the entire paddle, it is nearly impossible to transport that much water in a kayak hatch. 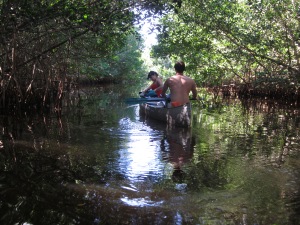 Although it is advisable to carry all your water for the entire paddle, some fresh water can be found, although it must be purified. Jugs of water cannot be in plain view if you are staying at island campgrounds, for raccoons will puncture each and every container. Conceal in another container like a large plastic tub with a lid. Or buy 5-gallon plastic food grade buckets and fill them with tap water.

A weather radio is also a good thing to have. Fronts coming through can bring vicious waves, relentless. It is good to know what is brewing so you can adjust your schedule.

There is virtually no shade. Bring along a long sleeve shirt, a brimmed hat, sunglasses and plenty of sunscreen. As mosquitos come out after dark, have ample netting on your tent, plenty to read, a deck of cards, a bright headlamp and multiple spare batteries/bulb.

Navigating a water trail can be tricky and needs some getting used to. A pair of binoculars is a must for the channel markers are often obscure. We also brought along our removable boat compass to mount on the boat. Carry the map in a plastic waterproof map case. GPS coordinates are also available.

If you would overturn your canoe with all that weight and gear, and virtually no land in sight, it would extremely challenging to get back in. Mornings usually present the calmest water.

On the chickies, your free-standing tent needs to be tied down so bring extra lengths of nylon cording. The tide will rise and fall in the night. When you tie your boat to the chickie, allow for slack..

Have some knowledge about fetch- the area/amount of open water the wind blows across. It builds, gathers velocity the longer the expanse. Bear this concept in mind when crossing large expanses of open water with wind. Plan which angle to paddle in, like tacking in a sailboat, to prevent rollers from capsizing you and instead, help propel you forward.

We averaged 2 miles per hour paddling so some days were very short.

You will see very, very few paddlers and don’t expect the motorboat drivers to see you. I motioned with my arm to bring it down when they approached us so they can let off the throttle.

DO NOT SWIM. Alligators could be lurking nearby. Five minutes after the kids swam off the dock, a large bull alligator came slinking through the disturbed muddy water, looking for fresh meat, obviously attracted to the disturbance.

After ten days, the whole paddle seemed to blend and melt into one

wonderful watery experience. It was the actual living on the water for that extended period of time that became so special, especially the four days in a row where we slept on chickies and never touched terra firma. I was afraid we would become bored as we like to move more than sit in camp and are strong paddlers but our schedule made us have some very short days. However, disconnecting with technology and society, (as there is little cell service, especially in the central part of the trail), as well as seeing only a handful of boats in the entire time, proved to be completely refreshing.

We sang songs as we paddled, made plans, shared dreams, and checked in with our kids. Sometimes, we just dipped our paddles, dipped our paddles, quietly, and seemed to dissolve into the timeless waters of the Everglades. It slowed down our fast-paced, action-packed lives.

The wildlife was captivating. Schools of dolphins raced alongside our canoes and played underneath. Dozens of alligators sunned themselves only a mere few feet away as we snuck through the infamous “Nightmare” passage and narrow, winding Gopher Creek , two of the favorite highlights of the entire 100 miles. We came upon vulture rookeries with 50 of the magnificent birds studded the tree tops like angels on Christmas trees. The trees and bushes were white-washed from their droppings, there were so many. If it was cool out, they perched with their great wings spread out, soaking up the heat with their dark feathers. There were swimming manatees, rare sawfish in the waters, white ibises, and herons to watch. 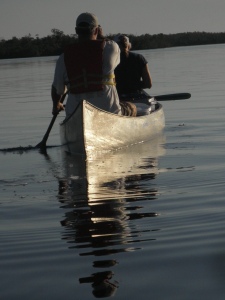 In camp, we played cards, wrote in our journals, read good books, sipped tea. The profuse amount of stars was breath-taking and when they were reflected back into the water surrounding our chickie, it made twice the amount!

Bull alligators actually snored through the night. Occasionally we’d hear a slap as we lay in our tents and know that a fish’s life had just ended. The circle of life was taking place all around us.

Experiencing the Everglades in a canoe for days on end was wonderful in itself, but the best part of the adventure was being together as a family. It was a luxury to spend such an extended period of time together with absolutely no outside distractions. It is incredibly rare and a huge gift the Everglades Wilderness Trail delivered.

Although Kenny has e-mail and occasionally looks at it, he is old school and needs to communicate and make plans via the telephone.