Out of the thousands of hikers who leave Springer Mountain, Georgia every year hoping to successfully hike the entire 2,100-miles of the national scenic Appalachian Trail (AT), only a few hundred make it. Your odds aren’t good. And if you would have heard that a 255 pound, 5’ 7” female was in that group in 2013, Navy veteran Stephanie Cutts would not have been the one you would have put your money on.

The climbs in Georgia’s southern Appalachians are hellacious, steep ups and steep downs and way too many in a day when you’re just starting out on your six month long journey and carrying a loaded backpack which your body is not used to…let alone the 100 additional pounds that Stephanie Cutts hauled along ! That’s like strapping twenty 5-pound bags of flour onto your frame or fifty one-liter bottles of liquid, besides your tent, sleeping bag, food clothing and essentials- virtually everything you need to travel and survive in the wilderness for days at a time.

But Stephanie Cutts is made out of incredible tough stuff and her passion to succeed at this monumental journey burned deeply.

When a long distance hiker reaches Pennsylvania on the Appalachian Trail, they are usually at a psychologically low point- the Tuscarora Sandstone rocks exposed on the long spiny Blue Mountain trips up the fittest of hikers. The elevation map reads like a cruising trail with little or no elevation change, except for an occasional water gap break. So they expect to motor through the miles. The heat and humidity also soar in July, when most end-to-enders come through our fair state and the denuded oak trees on the ridges, eaten by gypsy moth larvae, provide little shade from the oppressive sun. The half-way point of this 2,185-mile national scenic trail is in central PA. One thousand miles is a nice chunk of trail to have on your boots so quitting can become pretty darn attractive. It is a time when support and encouragement are most needed to get over the PA hump and continue the long push towards Mount Katahdin and Maine.

My husband Todd and I knew this problem intimately as we both completed the entire AT and ran a hostel for years along the route near Hawk Mountain Sanctuary, Eckville, under the Volunteers in the National Parks Program. When I first got wind that Steph and some other combat veterans were on the trail last summer, I wanted to hear and write their story. I wanted to feed them too, as long distance hikers have voracious appetites. I have a large support group of friends who have huge hearts and love to cook. We had a big pot luck dinner around the campfire and utilized my Rain Stick to pass around and use as a Native American talking stick.

The Talking Stick is a tool used in many Native American traditions when a council is called. It allows all members to present their sacred point of view. It is passed from person to person as they speak and only the person holding the stick is allowed to talk during that time period. Each veteran shared one story from their time in the military and one story from the Appalachian Trail. Every member of the meeting must listen closely to the words spoken. But the veteran who held the Talking Stick in my backyard did not need to command attention from the group gathered in the woods. All ears were on her and not an eye was dry.

Stephanie Cutts stood up to share her story, wearing a pretty pink sundress dress that she carried in her pack for “in-town” special occasions. She even applied make-up for the “event” here at my home.  Her full colorful sleeve tattoos appeared as if they were part of her dress.

“I joined the Navy when I was 17. I was a welder, a plumber and a fire-fighter as part of Damage Control. I responded to and trained responders as a team leader captain, to react to any type of fire or toxic gas emergency.  My ship was deployed twice in the Persian Gulf which was based out of Pearl Harbor.

“I was a rising star in the military” Steph continued, “but then I learned through a Red Cross message that my biological father had died. Because my ship had just left on deployment five days ago, I was too far away to be flown off the ship to catch a flight home from Hawaii, I was the only member of my family who could not attend the funeral. His death affected my career. I still did my job the best that I could but it didn’t matter because I kept failing physical readiness weight standards. I struggled to stay in shape but I lost motivation and the pounds kept adding up. Eventually because i failed so many tests, I was released from my contract 2 years early. So I was only able to do six years instead of eight.  I got progressively worse, I stopped trying. I couldn’t get off the couch. My top weight was 255.”

“While I was in the service, I never saw any of my family. I missed births, weddings, funerals. I could only go home once a year because it was so expensive and i couldn’t take vacations during the year due to the ships’ schedule. It has been like that my entire life. My nieces and nephews don’t know me. I need to spend more time with my family, stay in better touch.

“When I was seventeen, my mother went in for a check up cause she had stomach pains and we found out that she had cancer in her right kidney, and had surgery right away.  It was then that I stopped believing in God. I could not understand how someone who believed so strongly in God could have this happen. I’m hiking the trail to find God again, for God to find me.  I’m also hiking to get my health back, to get my life back. I’m going to find the motivation to put the rest of my grief and anger and all the things kept aside away.”

Steph paused to wipe the tears streaming down her cheeks, but then smiled broadly.

“When I went down to Georgia to meet the other veterans in my group, I was so scared I was going to be in the worst shape of everyone, be the biggest, but everyone had a gut, no one was in shape! Damn right, we’re gonna stick together,” I thought. “I was way excited to see those big pot bellies!

“I know my limitations. When it comes to hiking, I go my own pace. I continually reminded myself to not go someone else’s speed. “I wasn’t worried about my excessive weight. I wanted to dump a bunch of weight before I left, I tried to prepare myself. I read a lot, tried to motivate myself with inspirational quotes on a chart that tracked my weight, I attempted to exercise but it didn’t work out.”

Steph explained, “It is very difficult to hike heavy. It was hard to find clothing to fit that didn’t cause chafing. There are no Plus sizes in name brand hiking wear and I was a size 22-24 when I started my hike. I busted the crotch out of my pants, bandaged my terrible chafing sores with bandages and white surgical tape, then even tried duct tape which was a terrible mistake. Finally, I found blue bright blue pants with orange stripes at the dollar store. Even though I was still waddling with scabs on my inner thighs like road rash from a motorcycle accident, it was better. My feet and ankles were also swollen much of the entire hike and I had to always sit with my feet propped up to allow the fluid to drain. “

That day, Steph stood before us near the half-way point with 1,000 miles on her legs and thirty less pounds on her body and hugely hopeful.

Three months after the veterans Hikers visited my home, they planned to reach Mount Katahdin in Maine. I wanted to be there for the climb and join in the trails’ end celebration. Out of the fourteen that left Springer Mountain six months earlier, only four made it all the way and one was Stephanie.

When Steph reached the two boulders blocking her ascent up Mount Katahdin, she shimmied through and looked at me elated, “Yes! 2,000 miles ago and sixty pounds heavier and I could not have done this!”

She told me on the climb, “I was never worried that I couldn’t do it. To me, it was exactly what I needed. A goal- something to believe in. I couldn’t quit. I was doing it for something bigger than myself. I was committed to the program. When I gave my word to someone, I do it, no matter what it takes. Sometimes, it wasn’t very fun. I was hurting a lot. I know I am not a fast hiker but I can do my 2 MPH. As time went on, I could tell how much good was happening to me and also to the other hikers.

Once I got on track and had nowhere else but to move forward, I knew I would get there.”

There was misty fog on the summit when Steph arrived. From a distance, the veterans’ were ghostly, diffused. The large wooden sign stating, ‘Springer Mountain, Georgia- 2,180 miles,” emerged into view. Champagne bottles began to pop, cameras clicked. 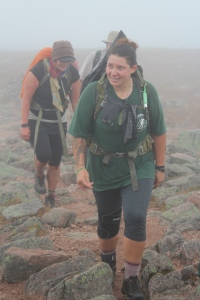 The veterans went up to the sign, one by one, as if it were a consecrated altar. Some embraced its rough wooden side and planted a kiss on the words, “Mount Katahdin.” Others collapsed at its feet, draped an arm affectionately over its bulk and murmured a prayer.  Steph just cried and cried and hugged and hugged with reckless abandonment.  There was no holding back with her release of emotion.

She told me up there, “I finally silenced the voice in my head that told me I couldn’t do something, that I wasn’t good enough. These negative voices plagued me since childhood and I worked on silencing them throughout my entire hike. I often thought about all the bad mistakes I made and learned to let go of them as the miles passed by.”

“The long distance gave me time to deal with it. Before my hike, I might have thought about stuff a day or two at a time, but then would lock it up and put it away for the year. The more I let myself heal, the better I felt. The longer I did that, the LIGHTER I felt. I was able to work through all my issues and leave them on Mount Katahdin. The trail changed me back to who I used to be.

Saint Augustine’s Latin quote, “Solivtur Ambulando” — it is solved by walking —could not be more true.

Today, Steph is a motorcycle mechanic and plans to open her own repair shop in the future. She has returned to school to learn small business management . Currently, she is a wellness coach at her gym, All Star Nutrition & Boot Camp, in Orange City, Florida where she serves as a support and encourages women to work hard and never quit.

“You cannot stay on the summit forever, You have to come down again…. So why bother in the first place? Just this: what is above knows what is below, but what is below does not know what is above. One climbs, one sees. One descends, one no longer sees but one has seen. There is an art of conducting oneself in the lower regions by the memory of what one saw higher up. When one can no longer see, one can at least still know.” – Rene Daumal- Mount Analogue

(material for an upcoming story in Women’s Adventure Magazine)