( a version of this will appear in Yoga Journal) 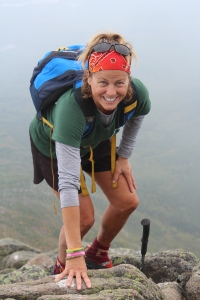 The “100-mIle Wilderness” in northern Maine on the Appalachian Trail (AT) is exactly  that- no roads, no sign of man, no cell coverage but wild balsam forest with impenetrable spruce thickets, moss and fern covered forest floors, rugged mountains, roaming moose. Eighty miles in sat thru-hiker Sharon Smith on a rock, having an anxiety attack. She felt sick with stomach issues, her phone was dead, she was so low on food and only had ramen noodles for breakfast, lunch and dinner for the next few days, she was behind her other comrades who were miles ahead and was exhausted from trying to catch up.

“I felt like I was in a Star Trek episode and everybody had been beamed up but me.”

Sharon was a combat medic veteran in Desert Storm/Saudi Arabia back in 1991 and for six months in 2013 she was walking off her war. On a rock, in tears, she used her yoga breathing techniques, breathing out fear and anxiety and breathing in only calmness and peace to get through the dark moment.

Her fellow combat veterans that she was hiking with nowhere to be found. She was very close to reaching her goal, Mount Katahdin and the northern terminus of the AT. For so long, she did not know if she would  ever make it.

Back in 2002, Sharon, a successful adventure racer and marathon runner, was hit by a Ford 150 pick-up from behind as she was running.

“My leg was so badly mangled that my left foot was in my crotch in more than a 90 degree bend. The top of my tibia was completely crushed and I had a complete dislocation of my knee.  My knee was fucked. My future as an athlete was fucked. ”

Sharon knew too much. As a physical therapist, very real fears of knee replacements and immediate onslaught of arthritis were probably in store. She suffered  three knee operations and had  two plates, eight screws and a rod put in place.

“The man who hit me had no insurance. I had no disability insurance and couldn’t work. I sunk $127,000 in debt, my car was repossessed. I lost twenty pounds and went down to 113 pounds (5’ 7” frame).  This would be enough to depress anyone but then the Iraq war began in 2003 and I began to have flashbacks from my time in Desert Storm.”

When Sharon was in the active reserve back in 1991, she was deployed to the border of Saudi Arabia/Iraq and worked the front line as a combat medic. She administered to the 1st Marine division as their combat causality support and also tended to the Iraqi enemy prisoners of war.

“There were B52 strikes and explosions all around me back then and boys getting hurt on a regular basis. The 2003 war triggered my flashbacks to return and I had to go on depression meds and anxiety pills.”

Life was pretty darn shitty for our girl Sharon and her bad knee was only one issue. A friend suggested she try Bikram yoga, believing the heat would warm her muscles and allow her a greater range of motion when stretching.

“That first session was very painful and I couldn’t get into the poses. But the instructor was very helpful in adapting the poses and positions using wedges and pillows.  Within that first session, I was successful in breaking the adhesions in my knee capsule and broke lose the scar tissue. I was able to go from 80 degrees to 110 and gained 30 degrees of flexion. I was an immediate and a complete convert in Bikram yoga.”

Within four weeks of practicing Bikram yoga, two times a week, Sharon was able to recover 100% range of motion in her knee. She went on to strengthen the muscles around her joint and yoga  contributing greatly. Sharon was able to compete in two 16-hour adventure races where she hiked, biked, kayaked, orienteering etc. and came in first place only one year after her accident.  There were a whole slew of marathons, half marathons, 10k & 5K’s that she participated in as well as successfully hiking and backpacking in the mountains with absolutely no pain at all! Bikram yoga had been a lifesaver.

But when she decided to join up with some combat veterans to hike the AT in 2013, she was more than just concerned. The physical demands of hiking 2185 miles day after day, an average of 12-15 miles per day, while shouldering 35-45 pounds could be a recipe for failure.   Would her comprised knee hold up as she crossed fourteen states and hauled her body and loaded backpack up 100’s of mountains? Would her depression prevent her from finding the mental strength to continue such an arduous six-month journey? Hiking and immersing herself in the natural world gave her the gifts of solace and comfort. She knew that every day, twenty- two veterans commit suicide due to depression and post-traumatic stress disorder, which translates to losing 45,000 of our veterans between 2005 and 2011. Sharon did not want to become a statistic. She wanted to hike the AT in order to heal.

So Sharon upped her yoga practice and strength training diligently before her March 15, 2013 departure date from Springer Mountain, Georgia. The pain in her knee miraculously never returned but by the time she had 400 miles on her 47 year old body, she was becoming so stiff and sore that she could hardly get out of the tent in the morning to begin hiking.

“I had to once again take up my yoga practice and did a series of stretching poses in my tent every morning in order to get moving. My hips and lower back were giving me the most pain. I was able to reduce my morning Advil intake from 800 mg to 400 thanks to the yoga stretching, particularly the Triangle pose and head to knee twists.”

In New Hampshire and Maine, the climbs are precipitously steep over huge boulders that almost require the use of ropes and yoga stretching helped her through. It wasn’t until Maine’s 100 Mile Wilderness when she felt alone and anxious, that she had to call on yoga’s valuable breathing and centering tool.

“On that rock, the squirrels chattered to me in an obnoxious tone as if to scold me for being afraid. I calmed down, got up and shouldered my pack and walked on to meet my friends the next day.” She was able to go on and arrive at Mount Katahdin in Maine, the northern terminus of the trail, a few days later. This final climb, 5,268 feet with an elevation gain of nearly 4,200 feet in five miles, was Sharon’s final challenge. Iron hand holds planted in the boulders required you to haul your body up the over the infamous “Gateway,” to the world above treeline.

There was misty fog on the rocky open summit when Sharon arrived. From a distance, the hiking veterans were ghostly, diffused. The large wooden sign stating,”Springer Mountain, Georgia- 2,180 miles,” emerged into view. Champagne bottles began to pop, cameras clicked.

Sharon draped her arm over the slanted sign, lowered her two strong knees down to the rocks and whispered a prayer of gratitude.

“My prayer was foremost to thank God for getting me there safely. That was a huge moment for me. I wanted so desperately to move on in my life and leave the depression behind. I had so many demons, I just wanted to let them go. I wanted to be free of all the things I had been carrying with me for all those years and leave them on the mountain top.” 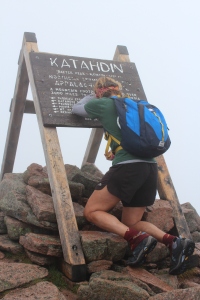 Now, three months later, Sharon can see the hugely positive results of her thru-hike on the AT. Before she left on her hike, her job had become rote and repetitive; she moved through her day like a zombie and lost interest in her patients.

“My time spent on the trail made me miss my patients. Now I love being with them and my career is a joy. I share my hiking story with my patients here in Ashville, NC, for many of them are mountain and outdoor loving people so we have a shared history of trekking through the hills. I often recommend yoga to my patients to help with their rehab as it has done so very much to give my life back to me.”

Sharon’s sights are  set on hiking the entire national scenic 2,600-mile Pacific Crest Trail in 2015 and the 3100-mile Continental Divide Trail in 2017 and yoga will be there every step of the way to help her achieve her goals!