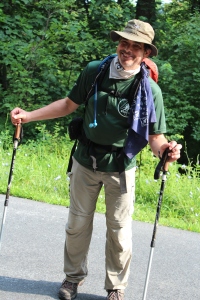 You immediately like combat veteran Rob Carmel as soon as you see his face. He has that effect over everyone.  His dark eyes were soft and kind and his face wore a sweet smile- hardly what you would expect from a Sergeant Major. He claims to be a bit of an introvert, typical for a long distance hiking personality, even though he held a commander’s role nearly all his life.

I had a landlord when I first moved to the Hawk Mountain/ Appalachian Trail area who was a Sargent Major in the Army all his life. He used to gruffly yell down to me from his house to mine, “Ross, police up that front porch!” if I left gear or a bag outside my door, and tried to invoke the fear of God (or the military!) in me.  Rob is not what I would expect from an Army lifer but he admitted himself, “I was only a hard ass when I had to be.”

Rob entered the military at a very young age- 18 and only left when they made him. Logging in at 50 years old, Rob celebrated a birthday and his retirement of 32 years of service to the U.S Army, both while hiking the trail. The rest of his hiking veteran friends wanted to make Rob the de-facto leader, as they’re most comfortable in a chain of command, whoever the most senior ranking person is.

Rob worked hard to NOT be in charge as it was second nature for him to assume that role.  “We’d get into a trail town with a VFW that hosted us and right away they would ask, ‘Who’s in charge?’ They thought we were a military organization. But we were all equal, which is contrary to what we are all used to.

“But here on the trail, it is time for us to all live on the same plane. I am ready for that. I don’t have to be the disciplinarian in everything. I need to have discipline for myself. ”

He did grow frustrated when his fellow veterans slept in, skipped trail, partied. He was wishing he could make them stay focused on the mission at hand. This was the most challenging part for Rob, to keep quiet and NOT dictate his wisdom, let them “hike their own hike” and learn what they can, by the choices they made. “It was counter to my identity not to have that power, and influence over the situation, to make it more structured.”

Rob rose before dawn and often had his daily miles in by lunch. “He was like a Bigfoot sighting,” his fellow hiking veterans admitted. “We’d see him on TV when the press interviewed him!”

His motto was , ‘Keep your eyes on the prize. Don’t get distracted by shiny objects.’

“I felt this was my opportunity to do this hike in life and I might not get another chance. “ That is the wisdom of the ages speaking. Seize the day.

Rob’s wife, Catherine, was behind him all the way in his hiking endeavor.

“My wife said the military made me different over time. I spent three years deployed to Iraq and Afghanistan. I never slept well after that.” She was happy Rob was hiking the entire Appalachian Trail to help him get over the war.

“Rob has always led by example. He was the type of soldier and leader and person who followed rules, obeyed laws, strove to do everything exactly right and perform in a way that was expected of him. It was important to him to be an upstanding person, behave in a way where your character was never questioned. He was completely absorbed in the expectation and concept of honor and respect that soldiers were supposed to embrace and be. He still carries that with him.  Rob took his job as a Sargent Major personally. He was all about being the best soldier he could be . He also held everyone else at a higher standard.”

Rob’s principals remind me of that quote…

Many hikers adopt trail names and have a new identity. Rob chose “Rob.”

“After over thirty years of being called different names, from Sergeant Major to Asshole, I just wanted to be myself!” he laughed. “I have to learn my own name while hiking the Appalachian Trail.”

Rob had his share of trail challenges, including passing kidney stones and being hospitalized for it. The three days he was gone from the trail however, resulted in him pulling an epic 34-mile death march in one day to make up the time. That’s focused!

Rob admitted that the challenge of hiking day after day was more physically demanding than anything they ever did in boot camp or even in the Marines.

“One of the most challenging aspects was the constant daily grind on your body. ..the inability to rest. Day after day, you beat yourself up, sticking to a schedule, and this made every other hiking veterans skip trail, except for Rob. He was the ONLY purist in the group.

“Being able to say, ‘I did this, from beginning to end’ was very important to me.”

In Iraq, Rob had been in charge of 3,000 soldiers. His brigade lost eighteen men one year  and that was hard on him.

“You make decisions and when people get killed you feel responsible. There are things that happened in the war that I cannot forget.”

“It was also difficult to be put in a situation where you are told to go and help people who do not want to be helped…or to walk the streets being looked at as occupiers instead of liberators. There is also the pain of going into a conference room filled with engineers, unit commanders, and other government agencies and try to figure out how to make people’s lives better when those same people just killed one of your soldiers or launched a mortar landing right outside your door. “

On top of Mount Katahdin, after finishing the entire 2,185 miles, Rob explained… 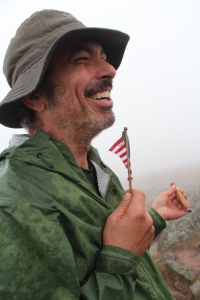 “We don’t really walk off the war. You can’t walk off anything impacting and tragic in your life. You can’t take a situation like we have been in and forget about it. Once you’ve done something, or experienced something, it becomes part of you and affects your life. You’re walking to come to terms with it, taking the good and the bad.

“While I was hiking, I realized that nature also has the good and the bad, ups and downs, like life.  The trail is not all smooth and flat. When you just cruise along in life, you don’t get anything out of it. The ups and downs make you strong.  What we have experienced will be with us forever, but we have made progress.”

Catherine told me that the man she fell in love with used to write poetry, compose songs on his guitar and sing them to her. Rob hasn’t done any of that since he’s been a soldier. She has not seen any of that creativity in years. The military isn’t exactly the place that nurtures and encourages creative an independent thought and lifestyle. Rob will have to dig deep to allow that part of him to come to the surface again.

He admits, “I haven’t figured out how to be a civilian yet.  Thirty- two years of active duty is a long time. The stress of being in the combat zone can be like experiencing a near fatal car accident every day for 365 days straight. Sleeping with a 9mm pistol next to your bed, on top of your nightstand, because there was a creditable threat against your life could also make you jumpy when you return to civilian life. Try coming back from this and dealing with civilians who want you to talk about your experiences openly while trying to fit back into the puzzle you left a year ago.”

Catharine said that “Rob has seen the world in black and white for over thirty years, instead of a million shades of grey. Things have to exactly right or exactly wrong. Grey areas are very hard for him to wrap his head around and he is much more comfortable in a black and white world. But I told him, now you have to learn to be a civilian.”

Catharine sees some progress in Rob as he attempts to stretch and accept new ways of thinking.  For example, he has been so ingrained in the thinking that authority knows best and is best for us, even down to our food.

“If the government or an organization is in place to tell us what is safe to eat (like GMO’s and pesticides), then they are.”

Catharine says no. We have to educate ourselves and be responsible for our own health.

“I have him reading labels now and eating organic food, avoiding junk food. He has the luxury now to question things in his life and to learn that questioning is ok and healthy for us as humans. Maybe not as soldiers, but as civilians.”

Rob can’t be in the military any longer but he does want to get back onto the trail, while he is learning to be a civilian and find his new place. The 2,600-mile Pacific Crest Trail is calling in 2015 with more healing, more adjusting ahead! You go Rob!! 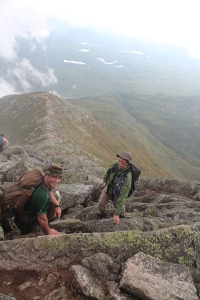