I can remember the first time I met a long distance hiker on the Appalachian Trail. I was fifteen and on a hike with my local hiking club, the Blue Mountain Eagle Climbing Club, http://www.bmecc.org/about‎ out of Reading, PA. He wasn’t an extremely tall man but his backpack towered over his bearded face. He was in a hurry and it didn’t appear as though he wanted to chat. He only half turned to answer the questions that my hiking club friends asked as he passed by.

“Georgia,” he answered as he disappeared down the trail, wet socks dangling from the outside of his pack, a plastic bag of fresh fruit swaying so it wouldn’t get crushed.

I remember being transformed that day. And my life has never been the same since.

My parents did not hike but when I was a young teen, I discovered that I loved it and wanted to do as much as I could. Although I did not yet drive, I merely had to meet at a rendezvous point in downtown Reading, PA give the club members a few cents for gas, and hitch a ride. The elders of the club shared so much with me, took me under their wings, taught me to fall in love with hiking and backpacking. I became active in my hiking club, building and maintaining a section of trail and paying it forward.

After hiking the entire AT in 1978-9 (two halves because of a broken foot), I penned my first book, A Woman’s Journey and went on to become a writer. The Appalachian Trail gave me a life, and an occupation. I never stopped hiking, went on to long distance cycle and paddle as well as write about these sports.

My husband, Todd and I got away from trail maintenance when we became parents but have recently gotten back into it. Todd helped the club build two log shelters as he is a log builder and a chainsaw carver and has since taken on the new position of Shelter Co-Chair. He is responsible for maintaining 5 shelters on our club’s 65 miles of trail.

Today my daughter, Sierra and I tug along for Todd’s early spring inspection of Bake Oven Knob Shelter. It is a very old and historic shelter, dating back to the 1930’s. The club ponders whether it would be a good idea to remove it, as it is less than a mile from the road and the scene of many a party and a trashing. There is no out house in the vicinity for managing a composting toilet is a challenging job that few choose to embrace.

I forgot how gross a job it is to clean up an Appalachian trail shelter after the winter breaks. There is trash everywhere, soggy toilet paper, used menstrual pads. It’s a good thing we brought along disposable gloves.

Strangely, there was a cooler at the shelter, loaded with ice and raw hamburger. Two dozen cans of beer and soda were tucked away inside the shelter. Collapsible stadium chairs leaned against the wall and a roll of toilet paper and paper towels, but no owners were in sight. We had come up a short cut trail only known to the trail maintainers. Had the owners gone back out to the road for yet another load?

We spent an hour picking up trash and Todd making notes on shelter repairs yet still no partiers. We slung our stuffed trash bags over our shoulders and walked out, cringing to think what would be left behind after this weekend’s party, and also about the club’s dilemma over the Bake Oven Knob Shelter. Should they build a new one- a log shelter, under the direction of Todd, or should they tear it down and leave the area resort to being wild?

When the idea of River House PA was born, http://www.riverhousepa.wordpress.com  my Co-Founder, Elizabeth and I realized that it would make a great extended project for some of our veterans. It would be a wonderful way to give back to the trail, especially after we taught them to be hikers and they experienced some long distance AT adventures on their own. Or, to merely pay it forward, thinking of that day in the future, when some of them would become AT end-to-enders like Todd and I and have their lives transformed. 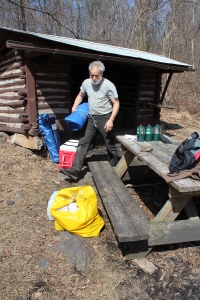 Shelter clean up after the winter is about the worst job as a trail maintainer. Shelter construction is quite fun, on the other hand, especially if you can learn a new skill like log building and perhaps even go on to build your own log home! And goodness knows, there are many miles of trail to clip and brush. Todd and I have only 2 ½ miles of trail on the Blue Mountain ridge and it takes us two days to clear it- with loppers and chainsaw, and that must be done at least two times a year. (Multiply that by 65 miles!) The Blue Mountain Eagle Climbing Club could sure use the help of some veterans who want to pay it forward! They schedule work trips on the trail every month- wonderful opportunities to get some exercise, make some new friends, invest in your future.

And, you just might run into a thru-hiker on his way to Maine, who could completely transform your life.

PS- Oh, and by the way, it is by no means a thankless job. You can’t pick up trash at a shelter or clip trail and not have nearly EVERYONE who sees you and passes by , say, “Thank you for all you do.” That is enough of a reward.

9 thoughts on “Paying it Back, Paying it Forward” Leave a comment ›