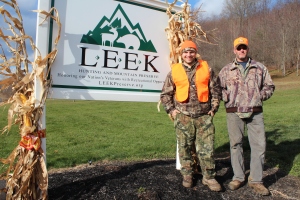 (Raymond Kusch on left and Jack Knouse on right)

Wounded Warrior (WW) Raymond Kusch picks out a leg prosthesis and an accompanying foot like a woman might make a shoe selection, depending on her activity level and function. He has nearly a dozen to choose from but today he’s selected one that is suitable for a bear hunt.

We’re up in the mountains of Potter County, Pennsylvania, “God’s Country” as it is affectionately called with a non-profit organization called LEEK. LEEK orchestrates about 5 hunts a year for America’s Wounded Warriors. It is one of many organizations who offer the gift of an outdoor experience to those who gave so much for us.

Missing limbs are not an issue for LEEK’s Wounded Warrior guests. Trackchairs transport the WW over fallen tree limbs, across rocks and wet areas, up and down steep slopes and right into wide, carpeted blinds where they can be pretty near certain to harvest an animal. There are also Kawasaki Mules and Yamaha Rhinos ready to cram WW, volunteers, bird dogs and guns into.

The WW feel comfortable with a gun in their hands, for it is an extension of their arm. The Range House has wide open windows that swing open and face a variety of targets, from 25 yards to 800 yards. The WW practice here, getting used to their gun, as the WW fresh out of Walter Reed, does not come with his own hunting rifle. They come with little more than their personal clothing.

There is a wide array of boots, coats, long underwear, socks, orange hats to select from.  Guns are provided, ammo, and licenses courtesy of the Pennsylvania Game Commission. Delicious meals cooked up by a wide array of local volunteers for the days they are residing at LEEK.

“We don’t want the Warriors to worry about anything,” shares Ed Fisher, retired Army Colonel.  Ed, and his wife Kate along with many volunteers, created LEEK seven years ago to provide injured serviceman and women a way to enjoy therapeutic outdoor recreational activities regardless of their physical condition. The all-volunteer run facility grew from 256+ acres to now having 31,000 acres at their disposal for hunting purposes. LEEK knows the life of an out-patient WW is hectic and full of meetings, appointments, therapies, operations, etc. They come on a LEEK hunt for a much-needed break.

Raymond had never hunted in his 20 something life until his wife decided to help her husband out of his slump and applied for as many outdoor mini adventure programs that are being offered our WW.

Ray has been deep-sea fishing in Cancun, whitewater rafting in Idaho, turkey hunting in Kansas and now bear hunting in Pennsylvania. “Anything to take me away from the hospital,” Ray says, “but especially being out here in nature.”

“It’s a little uncomfortable at first, arriving at LEEK from Walter Reed and not knowing anyone. I was an extroverted person before I blew up, which helped.”

“I was a sniper in Afghanistan, stepped on an IED (improvised explosive device), flew ten feet in the air and landed 15 feet away on my back. I watched my leg evaporate into pink mist.”

It’s difficult to tell that Ray is missing a leg. He limps a bit, trips some. This morning Ray demonstrated how the socket of his prosthesis has a seal-in liner and pushes out the air to make a tight seal. The foot inside his hunting boot is a rubber shell around a carbon fiber foot.  While we hunt, we sit together at our stand and wait for the LEEK volunteers to put on a drive through the thick clear cuts nearby, hoping to flush out a bear. I have his back, standing behind his tree, watching in a direction that is difficult for him to see. We talk some but mostly share the morning, feel the same cold breeze rushing up from the valley, hear the same raven calling, the same tree branches creaking. We both are on high alert, scanning the land before us.

The WW can rise before dawn and get in position for a hunt or decide to sleep in and fish instead or just relax. “It’s the WW’s hunt. It’s whatever they want to do,” says volunteer Jack Knouse.

Jack is now a volunteer but three years ago, he was in Raymond’s position- a guest, recuperating from a war-related injury. Jack is currently in the National Guard and you can usually find him at most LEEK hunts, giving back.

Once the WW scores a deer or turkey or other game, LEEK volunteers busy themselves in the processing center- gutting, skinning, quartering, packed up etc. so the WW can go home with his treasure that same day. They even send the meat out for processing and have it made into bologna or kielbasi, and shipped home. If a WW is on a tight schedule to get back to the hospital, they can turn it around in twenty minutes!

There is also a black powder deer hunt, spring gobblers and always pheasants. LEEK is licensed to raise the birds and volunteers bring their hunting dogs to help with the harvest. LEEK orders 300 day old chicks and typically releases 25-30 birds out a hunt. The harvested birds get divided up and all WW go home with meat. Last year, LEEK obtained a Regulated Hunting Ground Permit and puts on hunts from September 1- April 30. Seventy stands and blinds pepper the acreage as well as a well-stocked pond to fish.

After six hours of hunting and multiple drives, and still no bear, Ray relaxes and moves around talking freely to me. He shares his disappointment with what is currently happening in Iraq, worries for the village people who became his friends, wishes he could go back and help them. He then apologizes for his tirade but I tell him, that’s what we’re here for, to help, whether that means listening for a black bear to scurry through the autumn leaves or to a WW share his heart.

I ask Ray if sitting with a gun in hand and hunting brings on flashbacks from Afghanistan, for his job was a sniper before “he blew up.” No, “I like being in the woods.” He is happy out here.

Ray limps a bit more on our way back to the vehicle. “I try not to let my prosthesis get in the way of living.”

Yesterday’s hunt was on steep terrain, crossing creeks and Ray performed like a star. “Some days I am stuck in my chair. That occurs when I acquire sores on my stump, or I need a new prosthesis, for my limb will atrophy over time and shrink and need a new socket.”

“Using a prosthesis is very hard on your body. It stresses out my back, my whole body. I favor my good leg and will ultimately damage it. In the future, I will be confined in the chair, but for now, I can get around. I want to stay out of it for as long as I can.”

“These trips are good for taking me out of my comfort zone. It forces me to be independent. No one should live in a hospital. It’s depressing. Being in the woods, with a gun in my hands, I feel like I’m not broken anymore.”