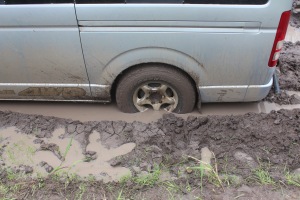 Today’s destination in “Magical Kenya” is the remote and infrequently visited Ruma National Park, home of the rare Roan Antelope. It is obvious it is not one of the more popular parks by the state of their toilets at the entrance station. This one simply has a hole roughly hacked into the tile floor. No porcelain squat toilet with ridges where you are to place your feet. At one time, it probably had a western toilet atop its gaping hole but no more. This should have been an indication of the conditions ahead.

It is the rainy season and although the frequent bursts of rain produce lush gorgeous green land, they can make roads impassible and rather quickly. Our bus driver, Tony, swerves and curves as if his van is drunk as we look for animals in the bush. After not spotting a Roan Antelope but many others and one treat in particular, a leopard, we are not disappointed. Our guide spots him lounging on a hefty branch of an acacia tree, his mighty paws and forelegs hanging lazily down, while an impala carcass sits stuffed in a nearby crotch of two branches. The leopard does not have to stretch far to enjoy breakfast in bed. We were just feeling like we had a good adventure when the van comes to a quick standstill. Tony guns the engine and tires spin, shooting mud and water up like a geyser. We are stuck badly.

Tony gets out to access the situation. He walks down the four wheel drive road looking for rocks and comes back with a few pathetic small ones in the palm of his hand. That’s not going to do anything we women say inside the van. He removes the shovel from the back end of the vehicle and pathetically attempts to fill in the water holes. The mud is sticky and dense and he chips at it like concrete.

“Call for assistance!” Suzanne, our spokesperson from Kenyan Tourism instructs.

We pile out, as the van feels stifling hot, despite the fact that some are unnerved knowing the leopard could be nearby.

As Tony works with our guide to free us, we hear a motor from behind. A large white bus approaches with the words, “School Bus” written on the front- seventy elementary school boys from a missionary school out for a field trip to see wild animals.

The teachers pile out as well as the bus driver and guide. They have already gotten stuck three times but managed to physically push the big bus through. They have no idea why the park officials did not warn them of the conditions ahead.

They want to strike a deal before they will help us. Suzanne says, “How about doing it in the name of Jesus? You help us just to be kind?” Indeed, on their shirts are printed the words, “Impacting Lives, Expressing Mercy, in Jesus’s Name.” We have them there. They consent. 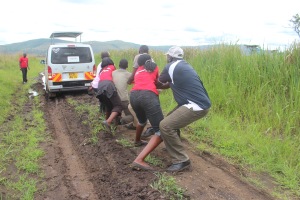 They first attempt to bodily push our van out. The females teachers help out right alongside the men.

When that does not work, they creep the bus closer and attach a wide nylon tow rope to the front of the bus and pull us backwards. Cheers! But then the men decide we must go forward again through what we just got pulled out of! All the women protest. “You will get stuck again!” they say. I think Tony should at least aim his one tire for the higher dry ground and the other for the section inbetween the tire tracks, but I certainly don’t push my idea and discuss the situation amongst ourselves.

The teachers are exasperated. They stand with their hands on their hips while the men decide to go forward again, right back into the deep muddy chasm of a track. They body language is screaming, “This makes no sense! This will not work! This is stupid!,” but clearly in this patriarchal society, driving and deciding procedure for this type of situation is clearly “men’s work.” Our suggestions fall on deaf ears. Suzanne once again instructs, “Call for help.”

The men take off their shoes, roll up their pants cuffs and get into the muddy sloppy challenge ahead.

Before long, it is obvious that the men want to basically build a new road, as ridiculous as it sounds to us women. They disappear round the bend and come back with large flat slabs of busted up concrete in their arms. Who knows how they found them. They toss them into the deep water and they splash with a kerplunk! The women teachers are good sports, despite the fact the men will not listen and in their dresses, they too help the cause by carrying slabs of concrete.

We writers go back and talk to the cute little boys hanging out of the windows, arms draped down the side of the bus, crowding at the door, dying to get out and a few claiming they must pee in order to break free of the prison of the bus. We have fun shooting their portraits. They ask our names and call to us individually, waving.

When Tony finally calls and a tractor appears, it pulls us through the mess in short order. This entire event took close to two hours.

We travel writers just observed and documented the whole event in photos. And, filled out a Visitor Evaluation Form where they got an earful, from the state of the bathrooms to the state of the roads. We did find it fascinating to watch the men’s behavior and the way they attempted to rectify the situation. Suzanne had it right from the get-go. Just call for help. But then again, what do we women know. At least no one got picked off by a leopard in the process.