Veteran Jason hiked the whole mile with a stick in his hand, whacking things and playing with it. I couldn’t help but smile. He was behaving like a free boy in the woods. I raised my son, Bryce outdoors, along with his sister Sierra, and so recognized the behavior immediately. Jason was one of twenty Veterans from the Lebanon VA Medical Center, enrolled in a rehab program and out for the day in the woods with River House PA.

Jason would disappear over the steep side of the bank as we walked and we’d say, “Where’s Jason?” He was just wanting a better look at the river below, allowing his natural inquisitiveness dictate his actions and movement.

The group looked like a motley one, walking the dirt road through the thick rhododendron with their bags in hand. It held a change of clothing or a swimsuit. A few of the younger vets went out ahead. They were free to walk their own pace.

The Lebanon Medical Center vans were parked by the river bridge on the Little Schuylkill River and my Board Member, Mike Schnur, drove the tubes the mile down to the swimming hole. There the river makes a turn where a creek enters the flow and it slows to nearly a stand still, so you can just hang out in the tube and not have to ferociously paddle back upstream. I planned to just stay in that area and switch off using the tubes. I only had 8 inner-tubes for 20 Veterans. 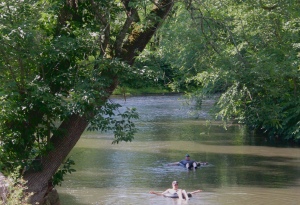 Recreational Therapist, Amy Cook, who is responsible for creating these events with River House, felt along with me, that a nice two-mile walk down and back would be good for them- some exercise and some fun. By the time we arrived at the spot, however, there were already a handful of young Vets in the water, on their way down the river, feeling like Huck Finn and Tom Sawyer. Unfortunately, we had to rein them in and tell them to stay in the area. “Put in around the corner and get out only a few tenths of a mile below and walk back, so we could switch off. TAKE TURNS- PLAY TOGETHER!”

Amy Cook is so successful at her role as a recreational therapist at the medical center because she personally believes that besides the therapy the Vets receive immersed in nature, they were also gleaning valuable group therapy time by being together in a group outing. Besides working together, they were sticking their necks out by coming to a stranger’s home, with an organization, like River House PA, many of whom are not military. Both in-patient and out-patient services join forces to bring Vets on River House outings.

I must say though, that half of the Veterans here by the river today were repeat adventurers from the last event River House held with the Lebanon VA, only three weeks ago. We went for a lovely hike along the same river, the wild & scenic Little Schuylkill River here in Schuylkill County by the Blue Mountain. On that outing, the Vets hiked about 3 miles RT and then returned to our log home to enjoy a cook out by the fire and hand crank homemade ice cream. The Vets who were still enrolled in their re-hab program three weeks later, reminded Amy multiple times, “Make sure I am on that list to return to River House!” One Vet, Alan, told me he personally asked to stay on in the re-hab program another week so he could join in on this event.

When Amy and I discussed future events together during our last outing, I said that a late June outing could be hot. If we were going to ask them to exercise on a hike in the middle of the day, it might be a nice reward to go for a swim and cool off. I have a few tubes and thought I could ask a few friends to borrow some for the Vets’ use. Amy and I were looking for experiences that didn’t just bring them outdoors in nature to help heal, but also experiences that might stretch them, put some adventure and joy of life back in their souls. The idea of swimming and even more, floating in a tube, created a list of interested Vets too long to fit in the vans.

But we just experienced a heavy rain the night before the outing, causing the river to muddy up and get even cooler, as well as air temps dropping to a humidity-free, comfortable temperature. I thought they might reconsider swimming and want to skip. When I asked that morning how many wanted to swim, Amy said, “All of them!”

When the first van pulled up in our driveway, the Vets from the last outing, tumbled out with outstretched arms delivering a hug. The newbies followed suit. I am Sicilian and a big hugger and their unusual show of affection can also be contributed to the love and care of their leader, Amy. She is a marvelous combination of a caring mother figure and a firm disciplinarian. She takes no shit yet she is sure to let them know she deeply cares about each and every one. Amy reprimanded the Vet who dropped his candy wrapper as soon as he exited the vehicle, reminding them that they needed to be diligent about caring for other’s property. At the riverbank, I observed how Amy stood watch over some of her more cautious Vets to make sure they stayed safe and had a buddy to be there in the water for them. Another time she sat with her arm around two Vets and they both exchanged how much they loved one another. 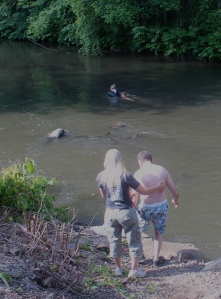 It was great to observe the laughter, silliness, and freedom that the Vets exhibited on the river as they PLAYED. There are not many opportunities for an adult to actually play unless they create them for themselves. We tend to grow serious and forget the joy that playing, specially outdoors brought us as a child, especially adults in re-hab where there are so many meetings and sessions and therapies etc.

The most heart-hitting image I saw at the river however was when Amy gathered the Vets to get together for the mile walk back to the vans, there was Wayne, coming down the road from exploring, on his crutches. We just stopped and stared and marveled. He walked the full mile back to the swimming hole with the rest, his choice, up and down small hills, keeping pace with everyone else. He did not see the long walk as a hardship or his missing leg as a deterrent. The power of determination and the need to be out in nature was overwhelming. 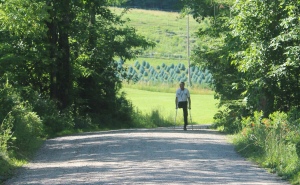 All the Vets displayed a healthy appetite for dinner and Chris, the other rec therapist along to help, got a few of the Vets to put on a few campfire skits like the Scouts do. It was all in good fun and it helped a few get even further out of their comfort zone and break down any barriers.

Amy went around the circle by the fire and invited the Vets to share, if they wanted, on what being out here on the river today felt like and meant to them. This is what I heard:

I didn’t think about the daily stresses of life.

I am happy here.

This is truly God’s country.

It calms me, being here.

I loved sitting by the stream with my thoughts.

This brings out the best in you.

Many said they had not swam nor inner-tubed in a river since they were kids, (one said it had been 60 years ago). It brought back fond memories of a happy childhood, sitting around a campfire, and they now have a vision of the life they’d like to return to and make nature play a major part of their lives again.

Vets who are fathers and grandfathers spoke of how they wanted to share these kinds of experiences with the youngsters in their lives. Everyone spoke as being hugely grateful to River House for the opportunity to be here today. And when we got to Wayne, in the circle, there was a big round of applause for his performance here today and his presence that inspired us all.

Gratitude is a huge part of the healing process and Amy is wise enough to know that teaching this virtue or at least reminding them of it, is a big part of them getting better, gaining control of their lives, and taking steps to creating a happy healthy way of living. We at River House, are grateful for the opportunity to share what we have and what we know to help our comrades. As Roberto Clemente said and is a River House motto,

“Any time you have the opportunity to make a difference in the world and you don’t, you are wasting your time on earth.”