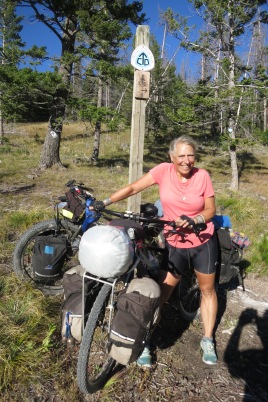 When my husband Todd and I decided to cycle the entire 2,700-mile Great Divide Mountain Bike Trail for our next long adventure, we immediately went to cyclist guru friend, Tim Brick of Brick Wheels Bike Shop in Traverse City, Michigan for his advice. As I am a travel writer and plan to write multiple articles about our trip as well as a new book on our long adventure, Tim helped us explore possible bike manufacturers who might be sensitive and supportive of our plan. Twenty years ago, Santana was our sponsor and gifted us two tandem mountain bikes that we rode for a decade, advertising for years what marvelous machines they were and what a wonderful way to experience the world of travel with your children. This spring, Tim and I approached a handful of manufacturers looking for someone willing to work with us, but Surly, (as well as Tim) was the only one who believed in us enough to help. Little did I know then, that we had the best of the best working with us.

We secured an ECR for me and an Ogre for Todd. I drove out to Michigan from Pennsylvania a week before we began our ride to pick up our bikes at Brick Wheels. Tim had his mechanics dress up our bikes with all the important and necessary gear like racks, odometers, etc that we would need in order to be successful on our ride.

Our Surly Mountain Bikes were the Rolls Royce of mountain bikes. The majority of bikes ridden by long distance GDMBT riders were Surlys. No other manufacturer was as greatly represented on the trail. And why is that? Because Surley out performed all their competitors. Most cyclists that undertake the entire 2,700 mile GDMBT do their homework. Your bike is the single most important piece of equipment. It was no coincidence that there were more Surlys on the trail than any other bike company. And MY bike, my fat tire ECR brought more oohh’s and aahhh’s from cyclists who did not have a Surly than any others. “THAT’s my next bike!” they would proclaim, or “That’s the best, right there, no better bike for this trail.” I felt pretty fortunate to be riding my rig. If anything was going to help me be successful, it was my bike. If your bike breaks, it doesn’t matter how much determination and drive you have, you need a reliable bike. And the GDMBT can be brutal on your bike. We saw broken bikes in the first few hundred miles but not our Surleys.

Before I left on our first leg of the Great Divide Mountain Bike Trail, I had a problem with dizziness and balance. While cleaning the ceiling of my daughter’s Boulder, CO basement apartment, particularly over the stove, I somehow jammed my neck by bending it way back for long periods of time. My neck muscles tightened and blocked blood flow to my ears, and so I was not stable. As the GDMBT has some single track to cross as well as considerable rough and rocky terrain to negotiate, I needed to be as sturdy and stable on my bike as possible. Tim had encouraged me to order fat tires on my new Surly Bike to help with this problem. And it sure did. The fat tires acted as amazing shock absorbers and rolled right over extremely rough terrain like a tank. Where my husband’s more narrow tires were wigging and wagging a bit as he steered around rocks, my bike remained stable and grounded. It was truly amazing. It gave me the confidence and control that I needed in order to feel safe.

Although we rode New Mexico’s GDMBT 20 years ago, which got us interested in long distance cycling, this was the first really rugged mountain bike traverse we have done since. We accomplished many other long cycling trails including the pilgrim path- Camino de Santiago across Spain (The Way of St James), the Erie Canal, the KATY Trail across Missouri, etc. but the GDMBT is in a league all its own. Although we found it more challenging that we anticipated, it was a very rewarding experience and we really enjoyed merely just riding our bikes long distance and seeing the land change as we paralleled and crossed the Great Divide of the Rocky Mountains as we headed south.

Part of our joy was crossing paths with the hiking trail, the National Scenic 3,100-mile Continental Divide Trail which we covered with our small children over a 5 summer adventure. That journey is the subject of my sixth published book, “Scraping Heaven- A Family’s Journey Along the Continental Divide.” It has been over twenty years since we followed the Divide southward and we became very excited every time our paths intersected. Where the CDT is a foot path and hugs the mountain ridges of the Divide as closely as possible, the GDMBT usually parallels the Divide, often in the valleys and utilizes forest service gravel roads as much as possible. On that rare occasion when our route took us up and over the actual divide, there we were reunited with our old friend, the CDT.

We also reconnected with some of the same folks who helped us resupply twenty years ago. It was wonderful to be back, this time on mountain bikes. Although we missed our children’s presence, who are since grown up, the GDMBT has become a way for Todd and I to reconnect to each other and usher in this new decade of life without children. What better arena than challenging ourselves on the GDMBT.

We finished up our month long ride this summer with 600 miles of the GDMBT as well as the 180 mile Icefields Parkway, Jasper National Park to Banff National Park, which we rode as a shake-down ride before beginning the GDMBT- about 800 miles in total. We will head back out next July to pick up where we left off and hopefully cover the next 1200 miles- finishing up Montana, Wyoming and across Colorado to the New Mexico border.

We could not have done it without the support of Surly Bikes and Brick Wheels and of course our bikes themselves. Thank you and we look forward to continuing the adventure!