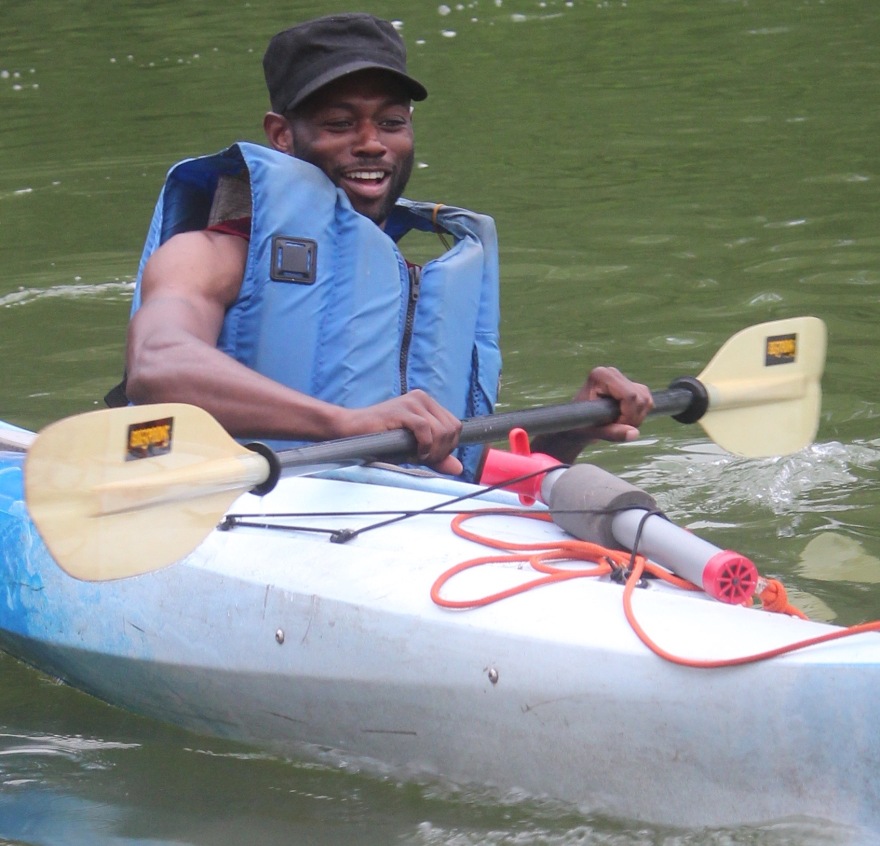 There is another Veteran who recently moved me, because of his rapid movement. (see previous blog post about One-legged Rockster Veteran Wayne)

It happened in July, when River House PA had a scheduled event with the Lebanon VA Medical Center Veterans. We were switching up the sport and heading to the Blue Marsh Lake in Berks County to canoe and kayak.

The vans were maxed out again as our nature-based RH events are becoming increasingly more popular. Everyone was pretty pumped to be there. Except for one lone young man. He did not want to paddle and he did to want to be in any photos.

“I guess to get away from the VA and to get outside,” was the assumption. Made sense.

He sat apart from everyone else reading a book.

I walked over to him and knelt down, “You don’t think you want to paddle?”

“Were you ever in a canoe or kayak before?”

“Well, you can sit in the front of a canoe and just be a stoker and not be responsible for steering. It’s beautiful out there and very easy. Since you’re here, you ought to think about trying it.”

And so he stood up and left his book and his solitary spot and joined the rest of the group at the lake’s bank. Partners were already chosen by this point, and what was left was a solo kayak, which he volunteered to take. I was impressed.

Lamier was paddling in rear of the group but he could not wipe the smile off his face.

I shared some paddling instructions with him so he could stroke more efficiently and without fatigue. Before long, he was out front and smiling even broader. Something clicked and he got the hang of it.

By the time the paddle was over, he was in love with the sport and was engaging with everyone, talking about what kind of boats are out there etc. and planing to get one of his own someday so he could continue with this sport which he fell in love with.

I took some really nice portrait shots of him, FOR him, I told him, but he since decided I could post them on FB.

This experience on Blue Marsh Lake was more one feather in Lamier’s cap of trying new things and building on his confidence that he can do what he needs to do in order to have the happy, healthy life he deserves. I told him, paddling and being on the water could be his personal happy place, where you find the most peace and healing. You wouldn’t know until you try it.

We had another RH event this past week. Besides Rockstar Wayne (with his one leg who doesn’t seem to know he only has one leg and does what everyone else does on two legs, maybe even better!), Lamier was the only Veteran to return. We had been away for the last two months and most of the Vets that came out in July had moved out of the program. Big hugs were exchanged when Wayne and Lamier exited the van.

A hike in the Appalachian woods was on this event’s schedule, another first for Lamier. And he loved the peace, the forest, the walking. He had never before been on a hike in the woods. He also told me that he recently got to go horseback riding with the VA’s rec therapists and that too was a first and he loved that too. Seems like our boy Lamier is finding a lot of firsts out in the natural world that he is loving.

As the Vets went around the campfire, sharing what they were grateful for, Lamier said he was grateful for the opportunity to stretch himself and try new things, to be out in nature and to continue living a new life. Amy Cook, Lebanon VA’s Medical Center Recreational Therapist as well as Ida Carvell, the out patient Rec Therapist, are doing an amazing job getting these Veterans out. Besides the important work they do in the center, the meetings, the workshops, the programs, these women understand how important the healing can be while recreating in nature with their fellow Veterans.

I look at Lamier and think, what next? You’re just open and willing and confident to keep going, positively in your life. It is amazing that a simple kayak paddle, a jaunt on a horse and a walk in the forest can help do all this but it can. Along with the help of two amazing Rec therapists, his fellow Vets and his friends at River House PA who all care so much for him. With peeps who care, anything is possible.