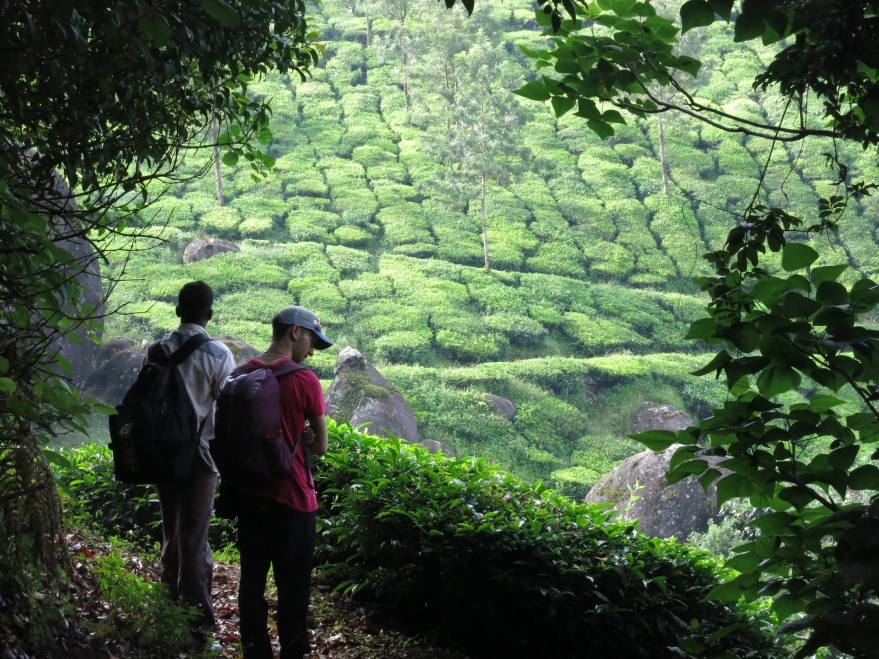 You might first hear the women who spend their days on the steep slopes of the hills around Munmar, India, clipping tea leaves. They are dwarfed by the immensity of the tea plantations, a lush emerald green world of narrow little trails that snake through the tea bushes. Their voices carry far and bounce off the hillsides. Every now and then a shade tree rises up from the low tea bushes, providing scant although important shade for the tea plants. The dark trails look etched, carved, onto the planet. There they are, spots of color from the women’s head scarves, visible from a distance if you follow the sound of their voices 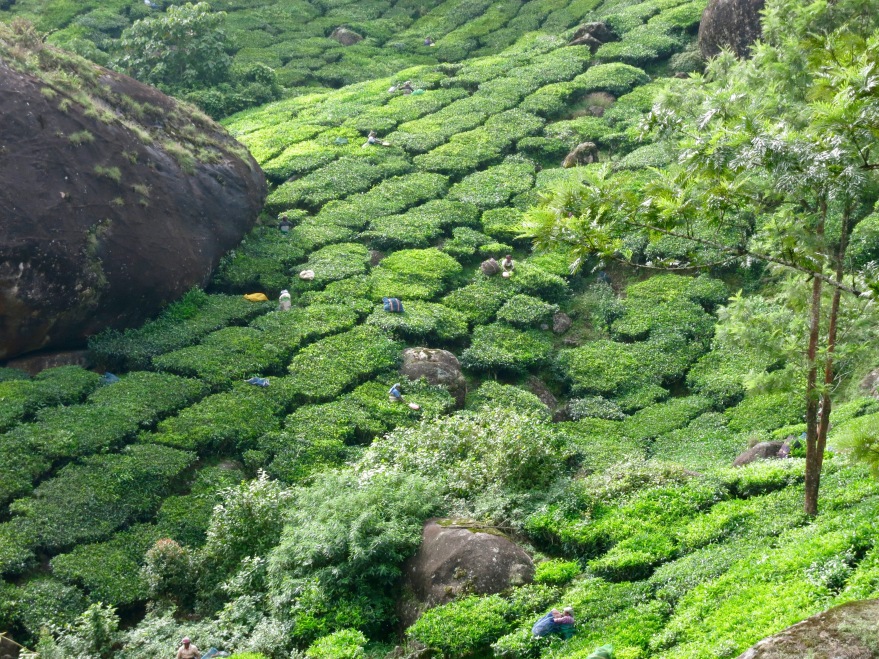 It appears to be fine work, there in the lap of nature, with immense and spectacular views. It sure beats an office or a tuk tuk driver on poverty filled filthy streets of Delhi. They have an office with a view and each other. The women talk amongst themselves, they are friends. 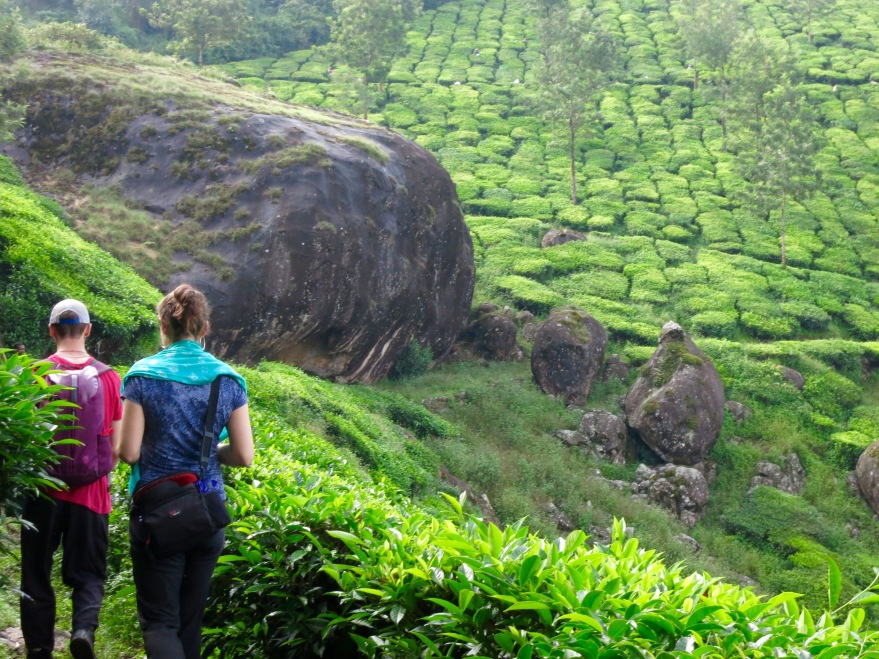 My family and I are on a day trek through the tea plantations, up and over the mountain top and down through the grasslands on the other side. We’ll travel through family-owned spice farms in the next valley over, therby completing our 10 -mile day. We have hired a guide, as it is illegal to traverse the tea plantations without one. Plus, we want to learn about what we are looking at.

Tea is the most widely drunk beverage in the world. There are more than 50 tea estates around Munnar, the area in southern India, in the state of Kerala, that has become synonymous with tea. This 6,000-foot hill station town is perched on the Western Gnats, a mountain range across southern India. It takes a 5-hour nauseating bus ride up winding narrow roads that remind one of the serpentious “Highway to Hanna” on the Hawaii island of Maui. 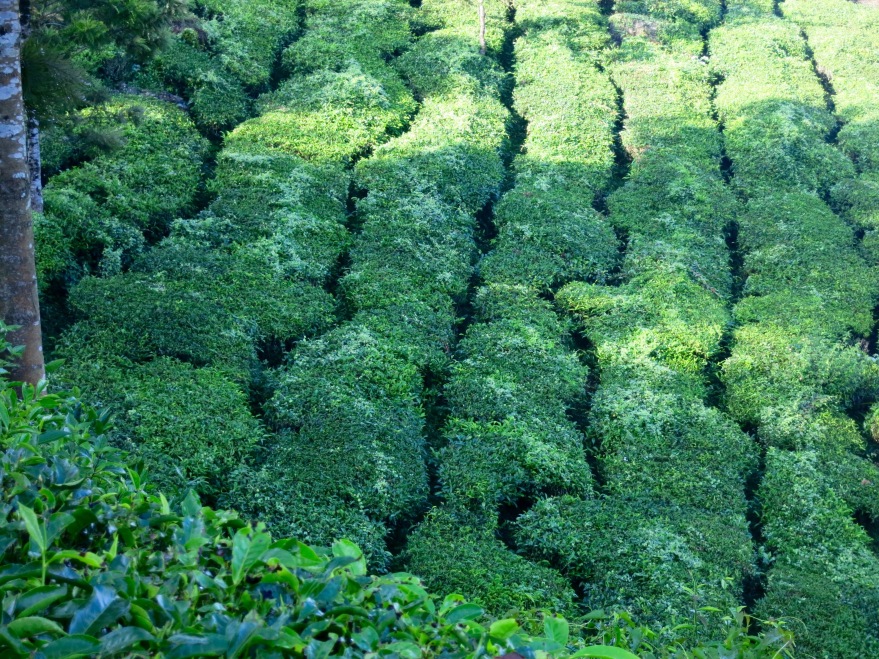 Fog and mist is a normal occurrence in these mountains, especially in the morning or during the monsoon. Clouds move in and out, revealing the gorgeous landscape which looks so unusual from every other place that I have been. It is the combination of wild and cultivated that is so unique. The patterns, the sculpted-ness of the rows look like art. 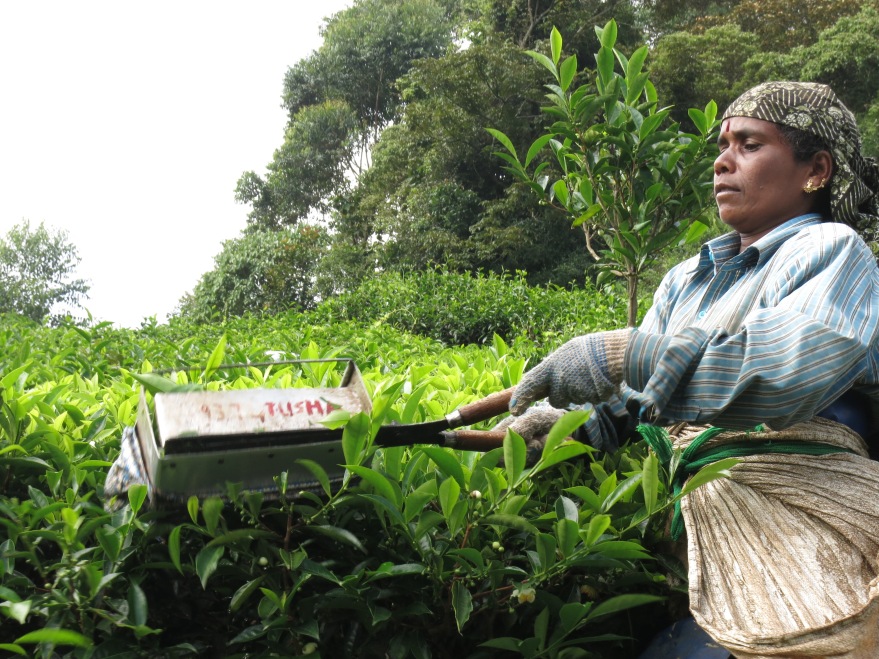 We gain elevation and reach the women just as the sun has dissipated the fog and bathed the hillsides in early morning light. We hear the “snip snip” of their hand shears. A cloth catcher in the shape of a box collects the young tender top leaves that they shear off. They dump them in a mesh bag that swells to 60 pounds in weight. The women hoist these on their heads and carry them to the loading area. The women look mad strong. They tie sheets of plastic around their torsos and secure them with scarves to hold them in place. To protect their clothing from the morning due and being ripped apart by the tea breaches. 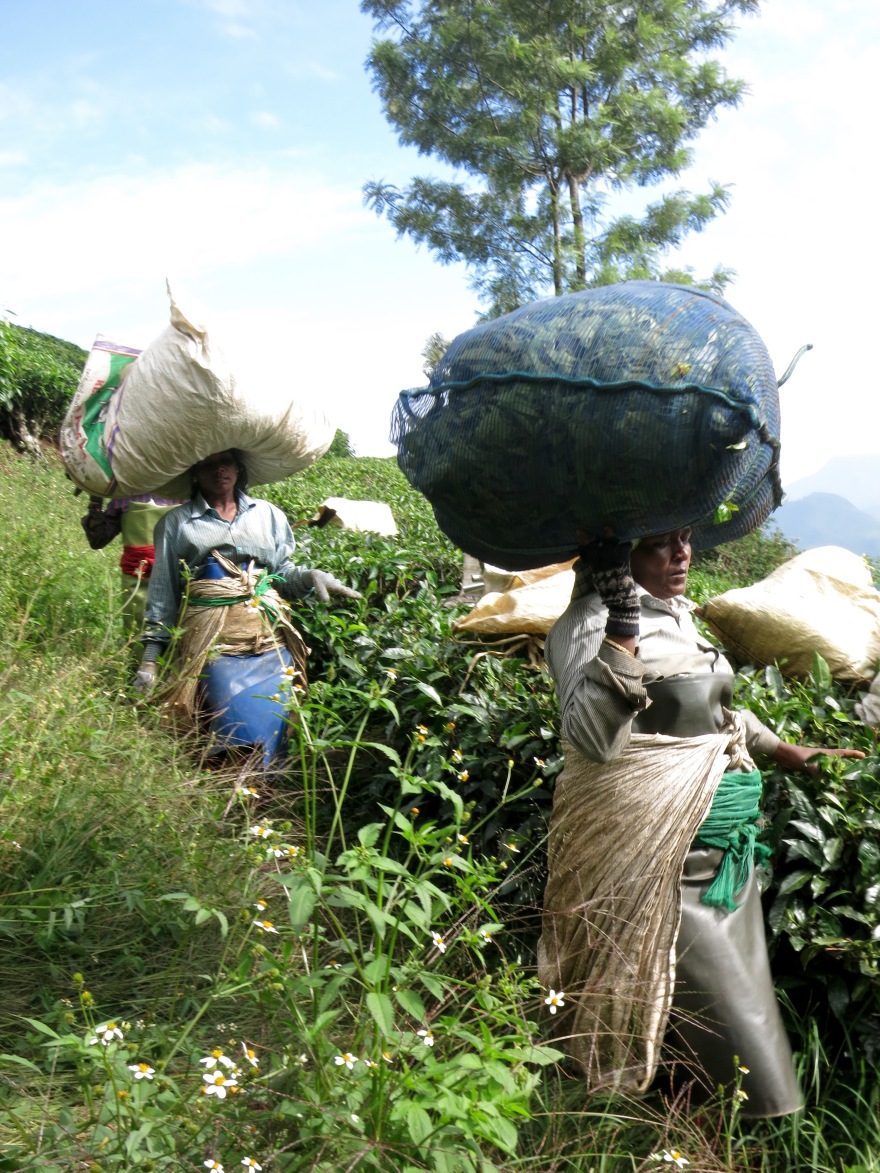 “Where are the men?” I ask our guide. Surely they could hoist and carry these massive bags of tea leaves better than the women. The men are working in the tea processing factories I am told. It takes concentrated work to run the dangerous machinery and women simply talk too much to operate the machinery safely, he tells me. Hmmmm.

We went to the tea museum in Munnar later and heard from the male docent how the women tea pickers are well cared for-  how they get housing, medical benefits and we thought wow- that’s great.

I later learned after I came home and went online that the women make a measly 137 rupees ($2 a day) which is far below the minimum wage of 250 rupees. They are reported to live in appalling conditions in company-owned shacks with leaky roofs, no plumbing, contaminated drinking water and exposure to pesticides. They work six days a week, rain or shine and battle leeches in the tea groves. The industry employs more than 2 million people and 70 % are women. Women tea pluckers are barred from any promotional opportunities in this male gender-controlled world. Truly, these women are subjects of abuse and violations of human rights. Things are not always as they appear. 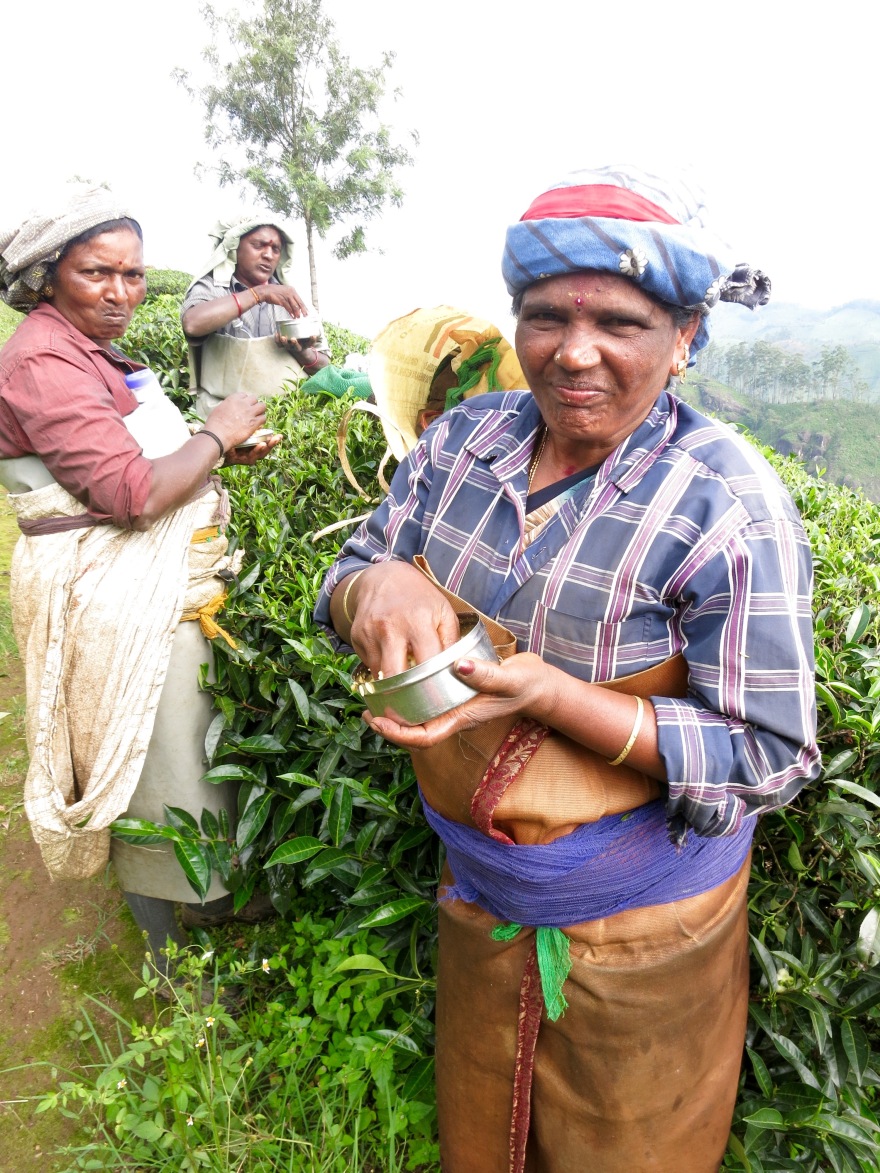 It is break time and the women take their tin food pails and stand and glop rice and spices into balls with their fingers and shove into their mouths. They offer me a taste as we walk by. Why is it that those who have the least are willing the share what little they have?

5 thoughts on “Working the Tea Plantations in Munnar, India- It’s Always the Women” Leave a comment ›

Leave a Reply to plmidwifeCancel Reply