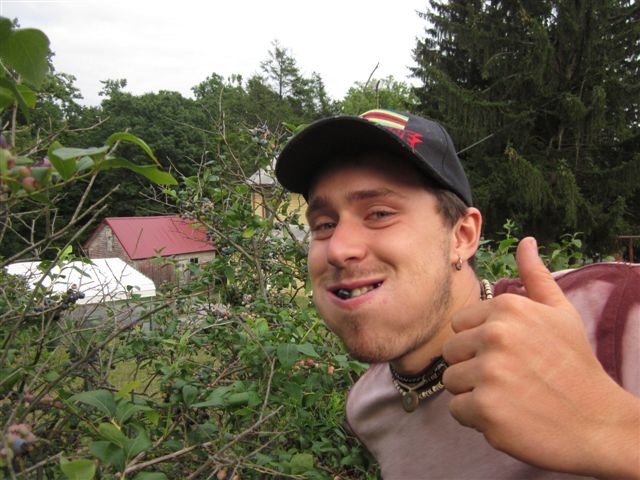 There was an old deaf lady named Shirley that lived up on Second Mountain in Schuylkill County that ran a pick-your-own blueberry farm. She had hundreds of bushes. She offered old, tiny tin buckets that hung from loops of white cotton clothesline that were available for pickers. We each hung one around our necks for two-handed picking. When full, we emptied them into square, green paper pint boxes that were lined up in rows on a long shallow tray, that sat in the grass nearby.

We went to Shirley’s blueberry farm hungry. In fact, we made a meal out of the event. Bryce would compete with himself to see how many he could fit into his mouth. His all-time high was at least 60. He didn’t get sick but he was close. He stopped when he approached being uncomfortably full.

Shirley knew the kids ate blueberries for really what is the fun of berry picking if you can’t indulge while you work. She knew that but my kids would position themselves with their backs to the house so they could eat to their hearts content, just in case Shirley was watching from the windows inside her house. Shirley always asked to see their tongues when we came down off the hill to pay for our boxes. The kids stuck them out and of course they were always deep blue. Everyone laughed. She caught them! But she didn’t care.

We made multiple trips to Shirley’s blueberry farm there when the kids were growing up. We always looked forward to it and we brought visitors along whenever we could. It was a highlight in our summer.

I began berry picking as a youngster up in Potter County at my dad’s hunting camp, where we went for summer vacations. Mom would make the raspberries that we picked into fabulous pies, and I saw firsthand- the joy of picking and eating in quick succession, truly enjoying the fruits of your labors. In my teens, my best girlfriend, Colleen and I would ride our bikes to Forest Hills Memorial Park in Mount Penn to pick berries. From the edge of the cemetery back to the Schuykill River, the woods were covered in wineberries. Up on Neversink Mountain, surrounding Reading, were also amazing wild blueberries. I first learned about chiggers from picking blueberries, those itchy little mites which bore into your skin and lay eggs and hatch offspring- disgusting! I had to paint each spot with clear nail polish to suffocate them. The bites were so thick where the tight elastic of my underpants touched my skin that it was solid red. I even spread them to my sister, JoAnn who slept in the same bedroom as me growing up. (That did not go over big). It was worth being infested with chiggers, however, the berries were so good. Years later, when Colleen and I began planning for our Appalachian Trail thru-hike, we pureed our picked berries and made dried leathers to eat on the trail.

Todd was a berry picker from way back too. He likes to tell the kids that he was a migrant worker and made a living as a twelve-year-old. He lived at his grandparents for the week the strawberries were in, just like migrant workers who traveled around and lived in different areas. He made twelve and a half cents a box, about two bucks and hour and fifty bucks a week. All his cousins worked at the Miller strawberry farm.

I’m not sure if many kids today get to pick berries, if their parents take them. Probably not. It’s probably one of those activities of past generations, when kids left the house for the day on their bikes and didn’t return home until dinner time. That was true freedom. On those forays, we learned about the simple pleasures of the summer, which included picking berries.

Shirley has since passed and her blueberry farm is owned by someone who does not care about berries. Most of the bushes were cut down and the few remaining ones are not producing well from not being pruned nor fed. But we have our own blueberries on our property on Red Mountain, which after 25 years are finally producing well. We also have raspberries, blackberries and a strawberry patch. Picking berries is a regular part of our summer evening for Todd and me- every other day, we’re out there with our bowls, chatting with one another, listening to the cicadas, watching the lightning bugs and mama deer with her babies in the orchard come out. I find it incredibly relaxing to pick, at 12 as well as at 62. It is a wonderful way to spend time together too- a clear focused, relaxed mind, conversation if you desire, or not. Even though our kids are grown and moved away from home, I am glad to have raised our kids in the berry patch too.

Twenty-eight-year-old Sierra is due home from India next week. She has been on Fulbright Scholarship for the past year. She has been compiling a list of activities that she wants to have when she returns and blueberry picking is in the top five. We raised her right, I’d say, when she considers the simple activity of blueberry picking a joy, and a necessary part of truly enjoying summer.

7 thoughts on “THE JOYS OF BERRY PICKING” Leave a comment ›