The Classic Cars of Cuba 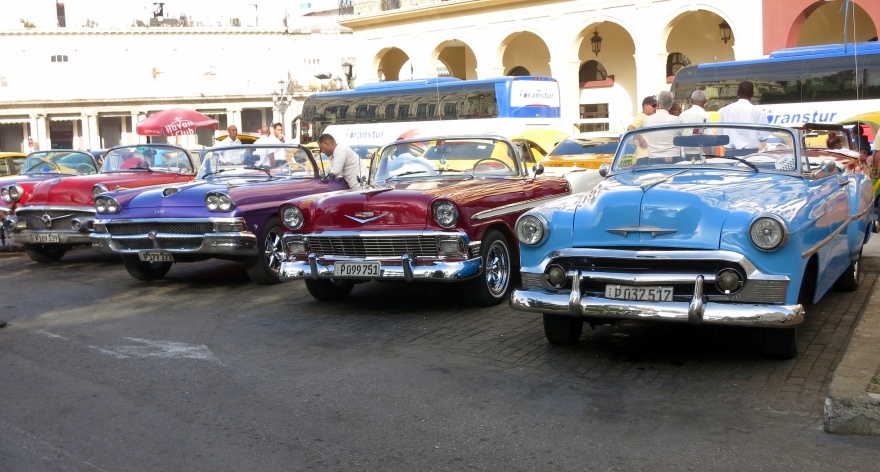 When I was sixteen, my father taught me to drive in my mother’s old car…a 1956 Chrysler with “wings” and push-button transmission. On the left side of the steering wheel, on the dash, were long “magic” buttons that you punched in to make the car go in Reverse, Park or Drive. The following youtube video from the 50’s says “women especially love it’s convenience and ease of operation.” It was considered a “driving control of the future.”

My mother hated that car as my father was prone to buying her used junkers that tended to break down and leave her stranded. We kids were happy to be able to learn to drive although the wings on the blue Chevy were lame and embarrassing. The car was only fifteen years old but it looked drastically different than the newer cars in their 70’s.

But on our recent trip to Cuba, I searched high and low for a car on the streets of Havana, just like the blue, push button 1956 Chevy that I learned to drive in. If it was going to be anywhere, it would be in Havana.

Cuba is literally like a rolling car museum. Fifty percent of all cars on the road date back to the 40’s and 50’s. I had heard this before Todd and I went off to Cuba to celebrate our 35th wedding anniversary, and although I don’t dislike old classic cars, they never moved me emotionally like they do some collectors. All that changed after a few hours in Havana.

Actually, my love-affair with old classic cars began after only a few minutes as our taxi from the airport was a 1940’s green Oldsmobile. It rattled and vibrated and its exhaust stank a bit but Todd and I were amazed that this relic had been kept alive, was street worthy and was being used as a taxi. Once we entered Old Havana, however, we did not know where to look for there were so many classic cars in so many colors, some looking shiny and new as if they just rolled off the assembly line, others broken down in the street with Cuban men hunched over their engines, others were being washed and pampered like a loving pet. I had to be alerted numerous times by my husband as I stood shock still in the middle of the street, waiting for a particularly beautiful car to roll by for a photograph. In the Plaza Central in Havana Viejo (Old Havana), the shiny classic convertibles are lined up like a car show. Their owners might be dressed up in bow ties and straw hats, ready to take you on a city tour or a slow drive along the Macedon (ocean-side drive). At one location, half a dozen pink convertibles showed off their stuff, waiting for tourists to jump into their white leather back seats for a photo op and a cruise. There are old school Chevys, Buicks, Fords, Chrysler Plymouths, Dodges, and Studabakers. One old car even had six rows of seats.

Although Cuba is only a 90-mile stone’s throw away from the US, no new cars have made their appearance on the island since the 50’s. After the 1959 Cuban Revolution, the US placed an embargo that forbade exports to Cuba, including cars and their parts. As a result, Cubans had to keep alive what they had and so they hand-made car parts, improvised, took engines out of old Russian cars, even used house paint (we saw an identical matching, sky blue car, house and fence!) The Cuban people had no choice. They didn’t even have the right tools to fix them but had to make them too. It is from sheer ingenuity that they run at all. These days, there are around 60,000 classic American cars in Cuba. About half of these cars hail from the 1950s, while 25 percent are from the 1940s and another 25 percent are from the 1930s. The cars are often family heirlooms, passed down from generation to generation. Taxi drivers make up the bulk of the owners.

Raúl Castro, Fidel’s brother, has since abolished the need for permission to purchase a foreign-made car. Cuban consumers can now purchase more modern vehicles but the price is astronomical, i.e. a Volkswagon would cost no less than $70,000, while a new Peugeot might sell for $250,000. Since the average Cuban makes about $20 a month, that’s not going to change anytime soon. Although they get many subsidies from their government, the Cuban people need to be MacGyver’s in more areas than auto mechanics, in order to survive. 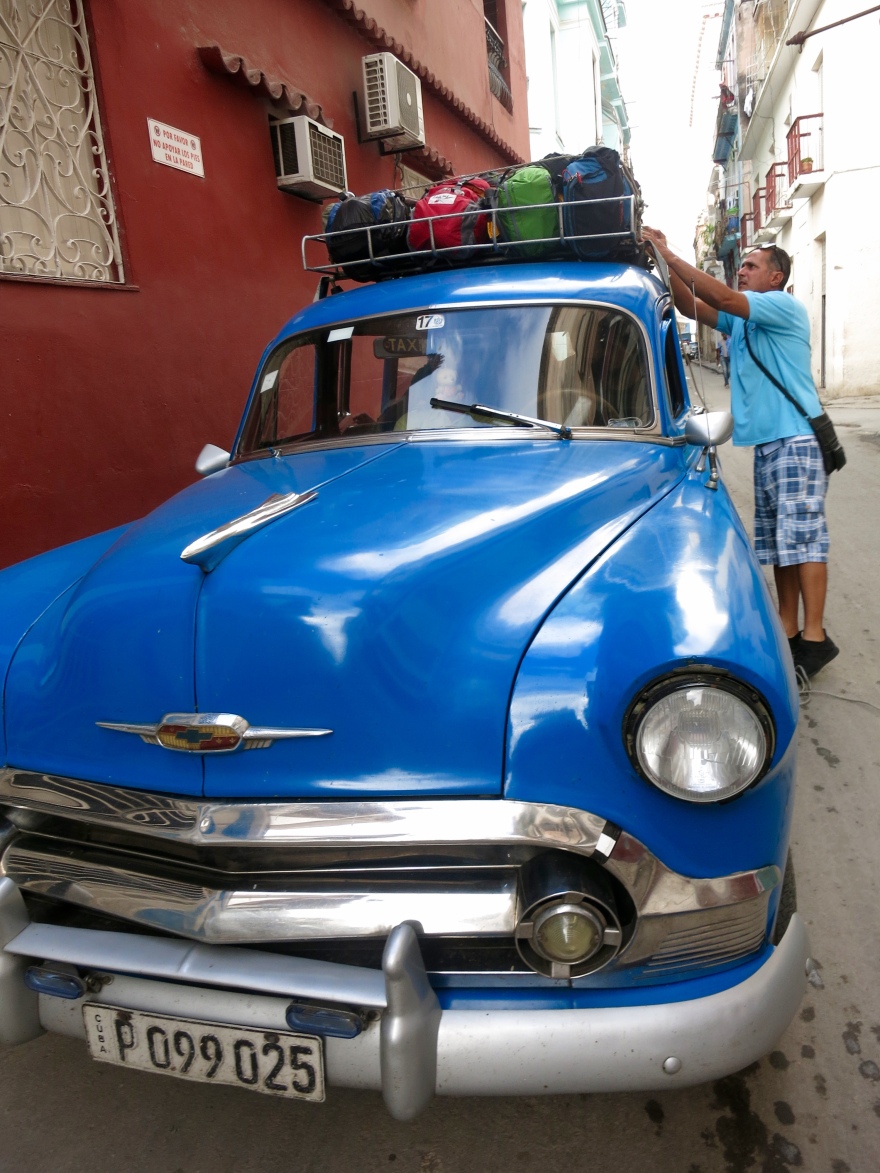 When Todd and I moved between towns in Cuba, we typically traveled in a “shared taxi.” Our homestay hosts arranged them for us the night before we left. The taxis are old cars, of course, and you share them with other travelers who are going to the same town as you. The travelers are all different ages, from all over the world, and it is not a bad way to travel. Everyone pitches in-between $20-30, depending on the distance.

But while we were traveling, our one taxi driver pulled off the main highway, traveled down a dirt lane, where a man emerged from a house and opened up a corrugated tin gate. We pulled around back, the gate was closed, and gallons of gasoline were poured into the tank. No government gas station was used to fill up our tank. We just got our fuel on “the black market!” A little while later, we encounter men standing along the highway holding two oranges in their hands. Selling food along the highway is a common sight in these countries. But then the man with the two oranges signaled another man in the field and he began to run and leap over the ground. He emerged in seconds with a very large bushel bag of oranges which our taxi driver quickly concealed in his trunk, slammed the hood down and off we went. He will sell them to others in Havana, we are sure, and make some money- the black market.

Our children were concerned when days passed after we left America and they did not hear from us. (Their generation thinks that there is internet everywhere.) Before we left the states, I forwarded each night’s homestay e-mail to our kids so they could have them should they need to get ahold of us. But we did not know that connecting is not as common as you would think. Many homestays have contacts in America who work their reservations for them, unbeknownst to us who make the reservations. In fact, we did not have internet until our last homestay (day 9) with a woman architect and her husband engineer. They illegally buy 8 hours of daily internet from their next-door neighbor who is an IT guy, who is trying to make a little extra money. Our host pays $200 a month for the wifi, so on $20 a month pay through her government job, they better have a lucrative homestay business to make ends meet and they do. (Homestays are about $20-30 a night for 2). By the time I finally called our kids on day 9, they were pretty concerned, especially since they wrote to one of our hosts and never heard back. 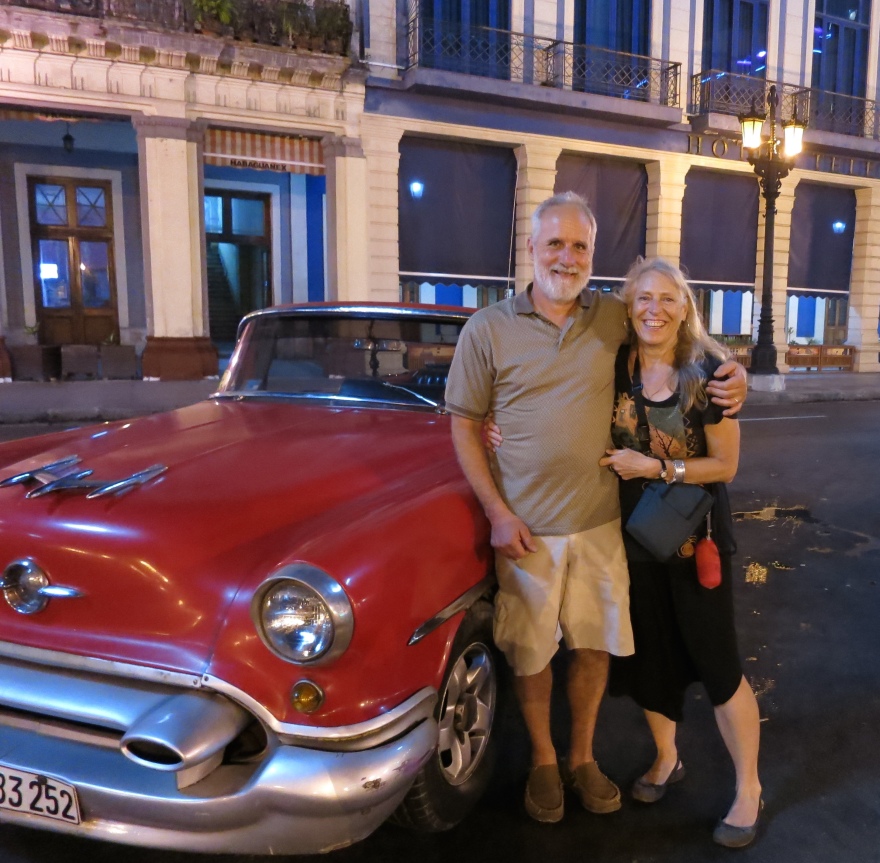 On our last night in Havana, I longed to cap our wonderful Cuban visit off with an evening ride in a convertible along the ocean drive. I could not find a 1956 blue Chevy with wings like the one that I learned to drive in, but a red (my favorite color) convertible with wings was an even sweeter second. Todd and I climbed into the back and held hands as we concluded our 35th wedding anniversary celebration.

“Que ano coche?” I asked in my broken Spanish, resurrected from high school, 40 years ago.

“The year I was born,” I squeal, and our driver laughs.

One of the best parts of going to Havana is reliving parts of your childhood. Something like a city full of old classic cars has the power to make that happen. To Cubans, they are just cars. To us, they are our history.

(Stay tuned for more blogs on how easy it was to get to Cuba, navigate through it, and return to the states, as independent travelers. Also, what a wonderful country it was to visit).

8 thoughts on “The Classic Cars of Cuba” Leave a comment ›

Leave a Reply to johnlamplCancel Reply