..a story from some years ago.. it appeared in the magazine Equs 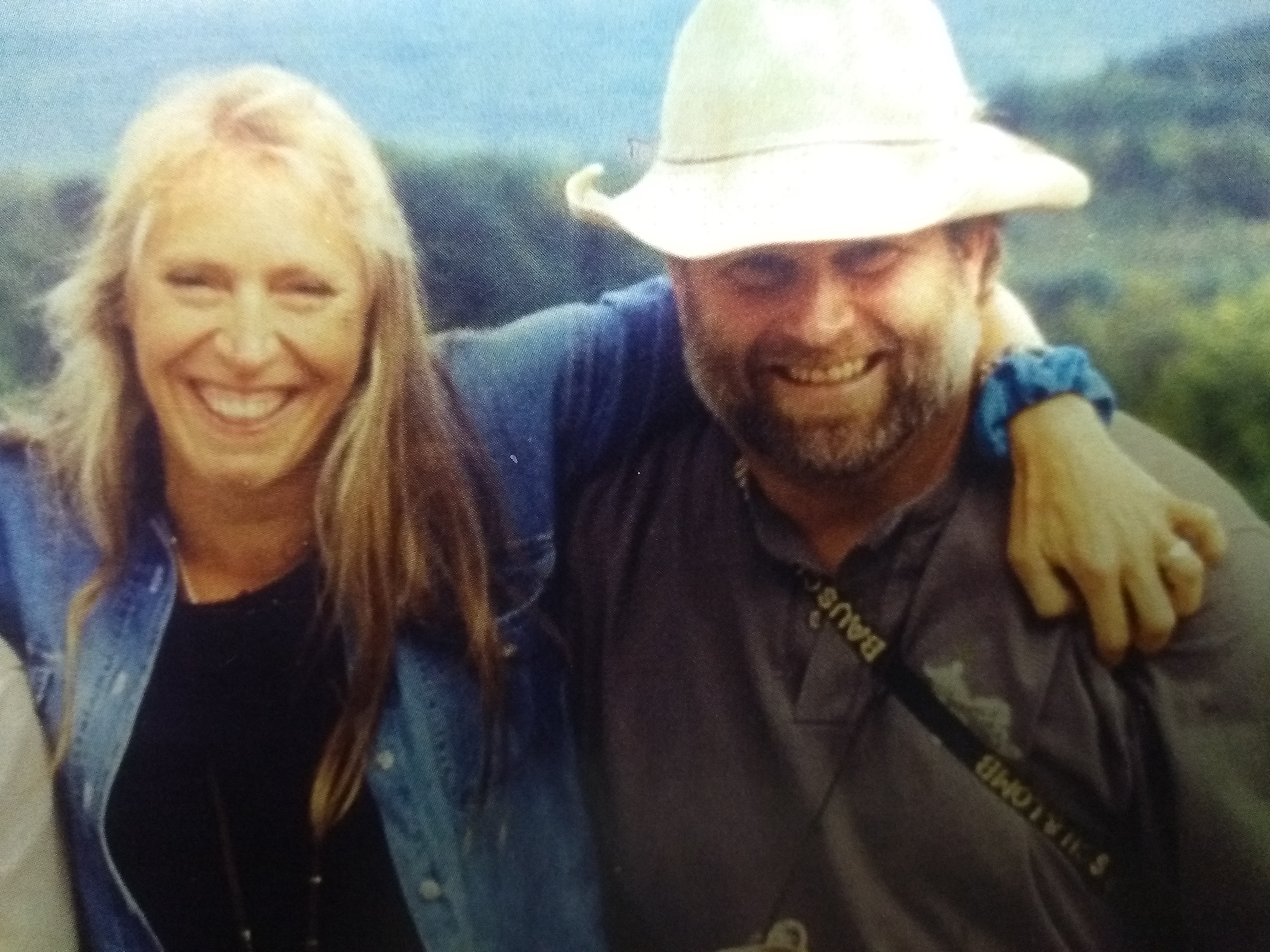 We had been riding for awhile before we stopped to take our very first break of a four-day ride.  Pat Maier, our guide, alerted all the riders, “Make sure the tree you tie your horse to is a live one.”

“No not that one, it’s dead!” he added in the next breath to a fellow rider, but it was too late. A horse’s rump bumped the trunk and while he spoke, an 8-inch tree dropped through the sky towards me.

I only saw it for a split second out of the corner of my eye and it was too late to move.  I was still on my horse, when it slammed me on my helmeted head and then my shoulder. The next thing I knew, I was on the ground in pain.

When I came to and opened my eyes, Pat was there, holding me and supporting my head. He assured me I would be alright. He had rushed to my side as soon as he saw me fall. Then another face appeared. The man said, “I’m Dr. Wayne, how are you?” It was another rider, one I had not met before. He examined me and said I didn’t appear to have anything broken. I had a bad bruise on my back but miraculously, I apparently suffered no head or neck pain. I slowly got up and turned around and saw two men looking at me very emotionally. I asked for Advil, ate some food and went over to a tree to rest.

One of the men, Jeremy Swerver, said, “I was directly behind you watching the whole thing. I’ve never seen anything like it. It was unbelievable to watch. If it weren’t for your helmet absorbing the shock, you could have been dead, or at least paralyzed. Had your head been just the least bit cocked, it could have landed on your neck or back.”

Another man, Randy Kraft said, “Dead woman walking. You’re a ghost, You shouldn’t be alive right now. I was so scared to see if I you would get up. I never expected you to move again, and then to get up smiling.”

These guys were wearing cowboy hats and one even had a red kerchief tied around his neck- And everyone kept saying, “Thank goodness you had a helmet on.” And as an afterthought, “And thank goodness it wasn’t one of us without one.”

“I’m too stupid to wear one,” Randy admitted. “It’s not MANLY,” and he made me smile at his honesty.

I always wear a helmet because I usually ride with my young daughter and at most stables a child is required to wear one. It’s a good example. None of the men in this group wore a helmet but nearly all the women did.

At lunch, Jeremy relived the whole episode. “Your horse handled the situation amazingly well. She just stood there, while the tree came crashing down.” Although I took the brunt of the tree, it also hit my horse’s rump. But Pat determined Black Star was not hurt.

Randy said the whole freak accident defied probability. “What are the odds of that? Of the horse bumping the tree right after Pat said that? (He didn’t say it on his pre-ride safety talk but a split second before it occurred) Or of the tree falling? Or it falling in a way to hit you? Or you wearing a helmet? Or you surviving? It’s a miracle. I don’t know if you believe in God or not, but now you have to spend the rest of your life figuring out why your life was spared.”

Now I felt even more shook and unstable. I was concerned about the rest of the 4 days and the remaining ninety miles.  I did not want to go home. The weather was perfect. I had heard this was a very special ride, scheduled only a few times a year by Pennsylvania’s Mountain Trail Horse Center. It includes lots of beautiful forest riding through the state’s wild northcentral mountains. We would be moving at a fast pace, no slow “nose to butt” walking like many trail rides but an enjoyable amount of riding side by side, cantering and running every day. Randy said, Since I’ve ridden with Mountain Trail, I’ve been spoiled for life and have not been happy with any other trail ride I’ve taken.” I never rode this many miles at a time and I knew my skill as a rider would improve greatly. I didn’t want to give it up.

Pat had to boost me into my saddle because my injured left shoulder could not lift my body up. He asked me how I felt and I replied, “It only hurts when I breathe in.” He looked at me quizzically and I said, “That is only half the time!”

That night, Doc Wayne told me to rotate my arm through the motions but after I did, I went to bed feeling new pain. Taking clothing over my head was excruciating. I laid there in the dark and began to lose my nerve. Tomorrow was going to be a long one- 30 miles and we would travel through some spectacular country. I didn’t want to miss it for I was enjoying the ride so much, but I didn’t want to hold the group back either. As long I favored my right good arm, I thought I could manage. I wondered, however, what the next few days would demand of me.

By the time my tent partners, Linda and Tim Flowers, arrived, I was close to tears. Turns out, Linda does massage and knew where to apply pressure to relax the spastic muscle. Twelve thirty at night, she’s applying pressure and massaging me for close to an hour. My heart warmed at her generosity. She also shared some muscle relaxing, over-the-counter drugs that enabled me to fall asleep.

The next morning I talked my concerns over with Randy. He said, “Don’t let your fear get the best of you. Many people definitely would have quit after that happened and no one would have thought less of them for doing so. If you’re not feeling to badly, you’ll be able to do it.”

That was all it took. I smiled and said, “Okay.” My choice was influenced by his encouragement. We do affect each other’s lives in small and big ways. No, this wasn’t a plane crash in the Andes where we had to decide whether to eat each other or not to stay alive. Small potatoes occurring here but nonetheless SOMETHING occurring, something important enough to be looked at.

Jeremy and Randy were with me for the entire four days. We rode past dozens of white-tailed deer, flushed grouse and turkey, saw waterfalls, far-reaching vistas and streams stuffed with trophy trout. We found where huge bears scared beech trees with their claws, and their scat so fresh it was still steaming. My riding companions and I sat together on breaks, got each other drink refills, teased each other and became fast friends.  I appreciated their attention and their spirit of encouragement. I didn’t need anyone to baby me but I did need support. It wasn’t a time to feel lonely. It would have chased me home otherwise. In these last four days of riding 100 miles, I grew leaps and bounds as a rider, I had a great ride and my heart swelled from the kindness shown towards me.

When the ride was over and I said my good-byes, Linda’s husband, Tim said, “I’m very sorry about that tree falling on you. It was my horse that hit the tree. I should have had better control of my horse.” Before this “confession” of sorts, I wasn’t sure whose horse it was and it really didn’t matter. The tree was ready to go. It only needed to be touched.

“Oh, don’t be silly,” I said. “It was a good experience,” which really surprised him. “I learned a lot.”

Others said, “You were in the wrong place at the wrong time.” I chose to look at it positively, that the falling tree created a rewarding experience.

When I got out of the woods and to a pay phone I called my husband, Todd. He teasingly said, “It’s been so long, we were beginning to wonder if we had a mother anymore.”

And I said, “You almost didn’t. You almost lost me,” and I told him the story.

He couldn’t speak for awhile.

My son cried long and hard when I finally reached home. I, myself, cried for a good hour on the drive home when it finally hit me.

Upon returning home, Todd said to me, “I don’t think I want you to go on these trips anymore.” I said, “It could have occurred if we were hiking. It was a blessing that I was horseback riding and had a helmet on.” Besides, should I avoid risk by living in a closet for the rest of my life? That didn’t feel like an option. So here is something else to look at in this whole episode.

They say that horseback riding is a dangerous sport. So why wouldn’t football helmets with enclosed faces be even better? How about a back brace, a coat of armor? Should we wear helmets when we’re walking in the woods and it’s windy or when we operate vehicles?

Clearly a line must be drawn. I doubt if my new cowboy buddies will begin to wear helmets even after this occurrence. They find it too uncomfortable and the odds are incredibly slim that it will happen to them. Yet it did to me and I was very glad I made that choice to wear one.

It all comes down to choice in life. How we will conduct our own lives, the risks we were willing to take and, equally important, how we respond to another person’s need. For if I have learned anything from my tragic accident, it is that simple acts of kindness can change someone’s life and influence how they handle whatever befalls-or falls on-them.

8 thoughts on ““A Matter of Choice”” Leave a comment ›