Helo pilot Judy Redlawsk knew she wanted to fly at the age of 10. Ever since she helped herd buffalo over Nebraska in a tiny plane. She was told however, that her options were a teacher or a nurse as far an occupation for women was concerned.  But she began plotting at a young age to work towards getting her license. Her mother had to sign a work order to allow her to wash airplanes and change tires at the local airport in exchange for lessons. On the exact day of her 16th birthday, Judy received her pilot’s license.  She’s been flying ever since and in the last ten years, has been part of the PA Coast Guard Auxiliary. 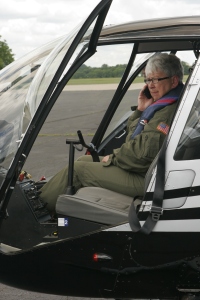 Now you may wonder what the coast guard is doing in Pennsylvania, a land-locked state but it is surprising how active and necessary their role is. And as your #1 reporter for the esteemed Pennsylvania Magaine, I am here to learn about it and hence report back to you all in an article. Stay tuned.

Schuylkill River near Auburn and my house. We run this dam in our kayaks.

In the meantime, Judy took me on a river patrol which are done at least two times a month. She picked me up at the closest airport- Grimes , down I-78 near Midway, where the Flying Circus Antique Airplane show is held. We flew south towards Lancaster, and picked up the Susquehanna near Safe Harbor Dam. Then we headed south to the head of the Chesapeake, across the Flats , up the Delaware and Chesapeake Canal to the Delaware River. Refuled in North Philadelphia then south to pick up the Schuylkill River, to Reading, across Blue Marsh to the Blue Mountain, down the ridge to my home and back to Grimes. ..3 3/4 hours of intense pleasure seeing the world from above.

While we flew the rivers, we looked for anything unusual: sunk boats, pollution being dumped, boats in trouble, boats too close to dams, etc. We found a ship dragging unusually low, behaving as though it ocudl be in trouble. Judy photographed it, and reported it. Then the Coast Guard in Philadelphia can decide if they need to act or not.

It was interesting to have to put on a LIFE VEST while we flew- becuase we spent most of our time over the water. And it was very heartening to learn the important job the auxuliary does on all our state’s rivers and lakes- education, boating safety, search and rescue, etc.

Our property from the air- note our orchard, garden, goat and chicken shed, llama/cow pasture and slate roofed home in woods.

It is always a joy to fly, especially over a place where you make your home. Rivers have always held a special place in my heart as we have paddled their water trails for many years. To see how they all fit together, drain into one another, curve and bend around mountains and towns, gives you a completely different persepective of this beautfiul planet that we live on.