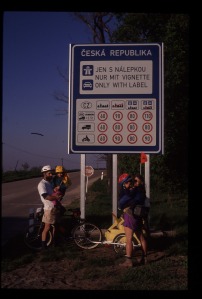 I met American Czech Lubomir Chemelar at an inn on Vermont’s Long Trail where we were doing a magazine story on hiking inn to inn as a family. Lubomir was doing research and collecting data on what Americans were looking for in an inn experience. He was designing and putting into motion a 250-mile greenway that would travel from Vienna, Austria to Prague. He later contacted me in hopes of getting some press coverage and brought our whole family over for the three-week adventure.

The route followed the 100-year-old trails built by the Czech Hiking Club as it travels through twelve rural towns, the majority of which lie along medieval Moravia and Bohemia. Besides our family, the trip included other media folks, as well as tour operators hoping to package the excursion in the future. This was first time we gave up control over all planning and executing of an adventure. It was a lot to trust in people we knew little about.

When Lubomir met us at the Vienna airport, his first comment was, “This is crazy. I am crazy for bringing you poor people here.” That made Todd and I real uncomfortable and it should have been a red flag. Then we saw the first few days’ itinerary- a 42 mile bike ride, then a 24- mile hike, then another 40+ mile bike ride. No one in the group was happy with the itinerary.

The kids rode in a bike trailer, which we collapsed down as checked luggage. They could not get out of the trailer for hours where they were crammed in together in their bulky pile coats. We often ate breakfast at 7 AM and consumed no nourishment until late in the afternoon, or walked ten miles without stopping for even a snack. We had to smuggle breakfast rolls loaded with apricot jelly wrapped in paper napkins to get the kids through the day (never a café along the rural countryside).

There were countless meetings with mayors and press conferences where we had to be present- the little American family promoting the Czech Greenway, and make the kids look happy on top of it. Of course, we did not understand a single word and the kids had to exercise extreme patience while the filming and interviews took place. Sierra finally broke down,

“I want to go home. I’m not having fun. I don’t like it here. I can’t understand what anyone is saying. I miss my kitties and my llamas. Either bring them here or I want to go to them.”

I told her both requests were impossible.

Lubomir and his colleagues literally threw the itinerary together the day before we arrived, and it was obvious that he knew nothing about the capabilities of most walkers/cyclists, especially a family with small children.

We were told we absolutely could not deviate from the itinerary, so Todd and I were forced to mutiny. My typically unassertive husband announced that we were going home. Then they began to listen and accept our terms.

Every morning, we examined the route and final destination and altered it to accommodate our family’s ability and desire. Before long, everyone else in the group opted to mirror our schedule.  We ended up becoming consultants and the entire trip was turned around, resulting in a wonderful experience.

There were many experiences that became memorable in my children’s minds, no matter their young age. Visiting the Bitov Castle whose eccentric past owner, Baron George Haas, had thousands of pet animals and stuffed over 50 of his dogs after their deaths. They are arranged on the castle’s parlor floor. His museum also contained cats, squirrels and badgers. Some are even dressed up playing cards at a table, or in costumes dancing etc.

On one hike, a heavy-set Czech woman decided she was hot and whipped off her blouse and hiked in her brassiere. The kids thought this very strange and I said, simply, “I guess she was hot and didn’t care if anyone else cared to see her bouncing boobs.”  Different cultures think different behavior is normal. It is good for even children to see that all over the world, people think and act differently and what is normal for one, may be strange for another, but it has nothing to do with bad or good or right or wrong. In the three weeks that we toured the Czech Republic, we only ate vegetables (besides sauerkraut) once- a small helping of pickled corn. “Veggies,” we were told, “are saved for the pigs.”

The most important thing that we learned in the Czech Republic is that we can figure out how to do international adventures, even with small children: on our own, being in charge, planning our own pace and rhythm and style of travel makes it that much easier.

I did not know it then, but this trip was a pivotal moment for me, because this is when I became a family travel writer which evolved into a dual lifestyle-job for my entire family. After the Czech Greenway experience, I was very successful at placing front page color features in the LA Times and the San Francisco Chronicle, and saw great interest in the media. I realized it is very rare for a family to be doing adventure travel like this as well as writing about it. I was convinced international travel was something we should continue to pursue all the years my kids were growing up. This experience gave us the confidence to make travel a huge component in our children’s upbringing and education.