No matter how many times I drive across the country, I will never grow tired of seeing that great wall of mountains- the Rocky Mountain Front Range- rise from the plains and come into view. For days we battle heat and boredom as we drive across the Midwest. We stare at the horizon, trying to make out the snow-covered blue peaks melting imperceptibly into blue sky. Then the land begins to rise, and somewhere in eastern Colorado I’ll yell, “There they are! There are the mountains!” They appear like a ghost of a backdrop. The mountains represent a different world to us. They contain undreamed of things that we have been yearning for. If we wondered for five seconds why we were doing this, when we see that range it comes rushing back. We feel like homing pigeons.”  Scraping Heaven- A Family’s Journey Along the Continental Divide, (McGraw-Hill, NY 2003. 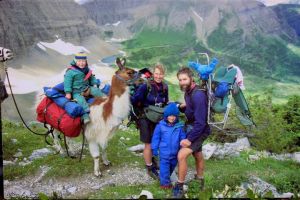 When I first wrote those words, Todd and I had a one and a three-year old in tow, heading out to Colorado to hike our first leg of the 3,100 mile Continental Divide Trail with llamas. Twenty years later, to celebrate this epic adventure, we are back, but now with a 21 & a 23-year-old. We are here to celebrate and re-hike a portion of the trail which did more to shape and mold who my children became  than other event in their lives. Sierra thought it important to return on our 20th anniversary. When I see those mountains appear on the horizon this July, my heart quickens like it did so many years ago. 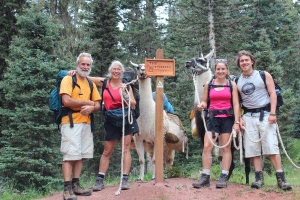 This returning anniversary trip feels epic to me. It represents something very large in my life. Passing by the Collegiate Peaks looming above the Arkansas Valley, reminds me of those days 20 years ago, when I first realized how much the wilderness and this long trail  taught my children. It was up there where we had our first nature lessons about beavers and fires and I realized I could and should TEACH my children. And now they are grown, launching into their own adult lives. I am anxious to see how they will feel being back.

Our own llamas that we purchased to execute that 5 summer journey are all dead, and buried in our populated pet cemetery on our property- all passing from old age or sickness. We are leasing llamas for this 10 day hike, from our old friend Stan Ebel, who first lent us his boys 20 years ago.

The Wemenuche Wilderness in the eastern San Juans Mountains is our desired goal, hiking from Wolf Creek Pass to Molas Pass (100 miles) but before we even leave Pennsylvania, we are set back with the widespread fires. We have to remain open and flexible and even up until the day before we head out on the trail, we visit the forest service for advice on approach trails and take-out points.

Our dear ol’ friend Wally White of Durango, who first turned us onto that crazy idea of hiking with small children with llamas, 20 years ago, is here to support us once again. He has not seen the kids since they were rug rats and now they are grown adults. What a hoot for him to get to know them as friends and comrades and see who they have grown into. 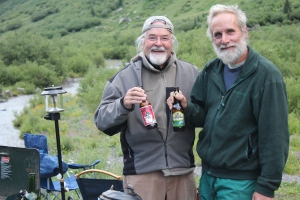 It becomes quickly evident that what we THOUGHT this trip would be like and what it turns out to be like are two totally different experiences. Our two friends who join us, Beth Ellen & Elspeth Pennell, battle with severe blisters and intestinal sickness. One of the three llamas we lease goes down and does not want to walk- a result of many lost leases in the previous months due to fires and trail closings and hence, not being in shape. Sierra was nursing a boil on her leg which turned out to be a mrsa staff infection. We switch out the uncooperative llama and also get a new water filter delivered (by angel Wally) for TWO of our water purification systems broke on Day 2. 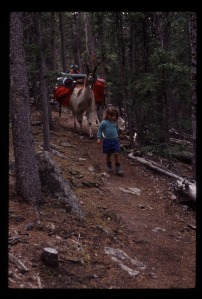 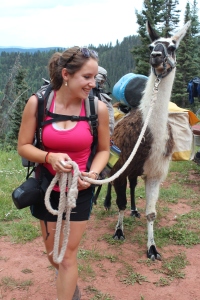 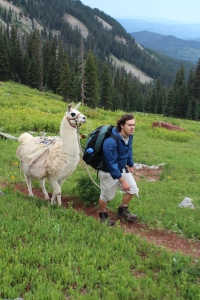 But his replacement is also not interested in walking. His pack weight went from 70 to 40 to 20 to nothing in order to get him to walk, yet still he continually lays down. Our last straw is when we have to summit the open Continental Divide at 12,700 ft while the heavens reel with dark grey clouds and lightning. We are carrying more weight than this beast of burden, as we gather his canvas panniers in our arms and risk our lives as we struggle to get down and get safe. 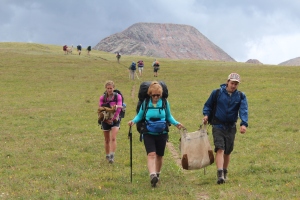 Once in the safety of an old miner’s cabin,  Todd & Sierra return to the Divide, in the rain and hypodermic conditions with a cell phone, making multiple failed attempts to contact the outfitter and tell him we are in trouble and to come get this other uncooperative llama. He does not know the area nor the roads and we are not certain that he can drive the 15 miles of very rough jeep track in, or if the llama will even walk.

Since we get a late start that next morning, we miss the pick-up, although we see his truck and yell to him. But he turns around and leaves only to return one hour later after we have hiked too far down the mountains to warrant returning and continuing.

And so our 10 day trip is reduced to 5. We get to car camp with our friend Wally and his new wife, Laura, whom we all adore and it is great fun to be together and get to know one another. We certainly manage to make the best of our time, even though it is not the trip we had imagined.

And so sitting around the fire on our last night, I ask the children their thoughts on the hike, on their lives in the last 20 years and how they feel about being back. 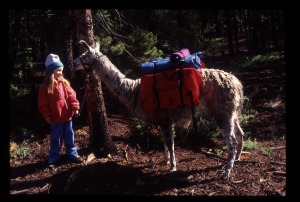 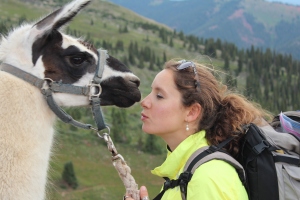 Interestingly, when compared to the last 20 years of adventures, including traveling to 18 countries as exotic as Morocco and Thailand and trekking in Nepal’s Himalayas as well as Peru’s Inca Trail, they said this is only ONE wilderness adventure, they have had so many and all were important, meaningful and life-altering. Fair enough. I wasn’t thinking like that as THIS JOURNEY was epic in their formative years. And they say that this 5 day trip seems to have as much drama in as the 3,100-mile journey. But they were small then and were pretty much unaware of all the challenges we faced- river fords, storms, wild animal encounters, navigating across wilderness, dealing with cloth diapers on a baby – it went on and on. But that is one of the biggest differences. THIS TIME, the kids were very much involved, in fetching water, loading llamas panniers, doing dishes and cooking, setting up the tent, helping and contributing. They are adults as opposed to little kids.

Both children want to hike the entire 2,600 mile Pacific Crest Trail someday as well as the 2,100 mile Appalachian Trail, for they love hiking in the wilderness, but Sierra said, that can wait until she is older. Now, she wants to do adventures like cycle the 4,000 mile Silk Road. This is when Laura, Wally’s wife said “Wow. She doesn’t see any limits in her life. She doesn’t have a comfort level that dictates where she goes and what she does. She is fearless.” And her mother swells with pride. I know that is one of the gifts that taking them 3,100- miles across the Rockies in their childhood gave them. Erased many limits. Twenty years later, here in the Colorado Rockies, that is coming out. 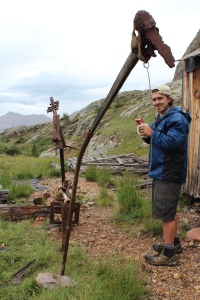 While Sierra and Todd spent hours on the Divide trying to make a call for help, Bryce entertained himself outside the miner’s cabin, creating sculpture from the found metal artifacts and mining scraps. He says it is great to know that he can entertain himself still out here, like he did a s a little boy- putting on puppet shows with animals bones found in camp etc. He said that while his friends need video games and smart phones to entertain themselves, he has always been happy doing creative play- 20 years the natural world still fulfills. 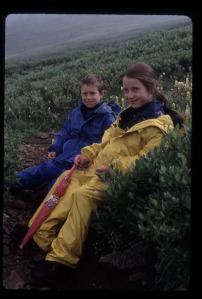 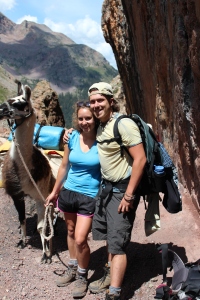 But I guess the most important thing is that life does not always turn out the way you planned it. This hike resulted in a  completely different scenario than we expected when we left Pennsylvania and we had to remain not only flexible but accepting of the challenges that were thrown at us, attempting to stay positive and happy with all the twists and turns..important lessons to learn in life…stay open, seek out the good.

Todd feels a tad disappointed that we did not hike our beloved Wemenuche ( and only covered 50 miles as opposed to 100) and that we should definitely plan to return before we turn into crippled geezers and geezettes. (like a yr or two!)  Maybe buy our own llamas once again or go for the crazy lightweight movement and hike into the mountains for an extended time with a pack weighing 25 lbs (including water & food). Todd says I am not lightweight bp material- I’d have to forego my journal, SLR camera etc. One thing we all do know, we will return. We stayed away from our beloved  Rocky Mountains way too long. 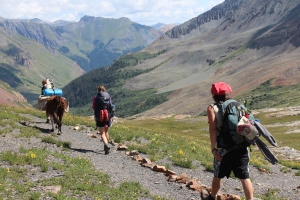 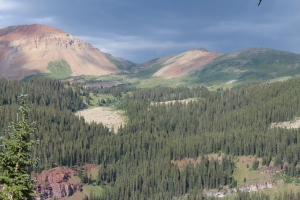