I don’t believe my children will ever erase the image from their minds of the Mayan pyramids colored red from the blood of rolling sacrificed human heads down its steep steps. That was back in their adolescent years when we cycled around the Yucatan Peninsula for a few weeks, adventuring and learning about these people, past and present.

As a homeschooling mom, I believed in ritual. I worked to create it in my children’s lives and have it become a part of their education. I believed that as humans, we have a deep need for connection, especially at times during great change. Ceremony and rituals help us embrace the stages of our lives, give us strength and comfort, gain perspective and the confidence to move deliberately into our future.

On the solstices and the equinoxes, our family created celebrations where we cooked over a campfire, shared readings about the seasons, went on moonlit walks, played music etc. Traveling to other countries and learning about and sharing in their rituals, broadens us. Sometimes, like on top of the Mayan pyramids, it makes us uncomfortable. But becoming uncomfortable is not necessarily a bad thing. It forces us out of our comfort zone. It makes us look at own culture and lives. It opens our minds. And sometimes, it can deeply impact us. 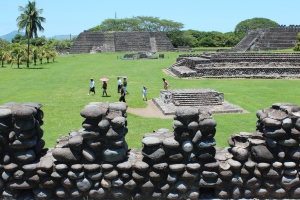 Years later, I recently visited Veracruz, Mexico where we traveled to Cempoala archeological site and learned about the Toltec Empire dating back to the 10-12 centuries. It is a small site, compared to the Yucatan’s Chitzen Itza, and unusually in that the pyramids are made of round river rocks. They were held together with a stucco that was composed of cactus sap, eggs of birds, smashed sea shells and sand. Chunks of it lie about the pyramids and it feels recent. Indeed, the 12th century is not that long ago.

The site felt pleasant, strolling around the open grassy courtyard until we made a stop in the museum. Here, in a glass case is two foot high clay god, Xipe Toltec- the god of life-death-rebirth, the god of agriculture, etc.  He wore a skin suit. Stitching over his chest showed where the heart was cut out. Skin hands hung down around his wrists. In the back of the figure, stitch marks showed how it was fastened onto his body. It creeped me out. We didn’t know if was merely a symbol or the real deal. Until I came home and Googled “Toltec skin suit.”

So here is the story. In the spring, to celebrate the equinox, before the onset of the rainy season, the Toltec people created a ritual. Slaves were sacrificed to the god, Xipe Toltec, whose skins would be offered up. After removing the heart the body was carefully flayed to produce a nearly whole skin (imagine that process and the person in charge of executing the procedure). The whole skin was worn by priests for 20 days during which fertility rituals were held. Then the priests emerged from the rotting skin, symbolizing the casting off of the old, the growth of new vegetation, rebirth. 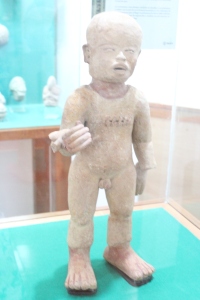 The Toltecs weren’t the only ones who got into flaying. The Chinese habitually did it to people’s faces, and one emperor, Hongwn, ordered 5,000 women flayed ( a female hater if there ever was one). Some Medieval Europeans continued the practice and there is documentation that France had incidents of flaying up until the recent 18th century. The most disturbing of all, however, were the Assyrians, who used the method of torture to punish a person by making them watch their young child being flailed alive person their very eyes.

Travel and learning about other cultures broadens you. Sometimes it deeply impacts and disturbs you. Like the rolling heads down the red fronts of the Mayan pyramids, I don’t believe I will ever get the image of the Toltec skin suit out of my mind. A moonlit walk, a campfire dinner is ritual enough for my family.