The strangler fig vine begins with a tiny single seed that is deposited in a crevice in a tree, often by a bird. Like an orchid or other epiphytes, the seed germinates, sends roots downward, seeking nutrients from the soil. It also grows skyward, seeking sunlight above the canopy. Then the vine completely envelops the host tree, which usually gets strangled to death.

When I first visited Heran Cortes’s home in La Antique, a sleepy village north of Veracruz, I was amazed at how the strangler vines had completely taken over the structure. It appeared to be devoured by their long ropy tentacles. The strangler vines reach right into the original Mexican clay tile floor, wrap around the window sills and door jams. New roots reach down, suspended in the air, attempting to reach the earth. Maintenance people hack them back, to prevent the vines from completely consuming the structure.

La Antigua, located a few kilometers north of Veracruz, is considered to be the first real Spanish town in all the Americas. Cortes’s home is one of the oldest Spanish structures in Mexico. It is made of local stones, big hunks of coral, and bricks from Spain brought back as ships’ ballast, to be exchanged for gold. This was also Cortes’s Custom House and Armory.

Cortes brought European diseases to the indigenous people and together with slavery, decimated 90-95% of the population in the first years after the Spanish arrived. He also pilfered ship after ship full of Mexico‘s gold and silver and carted it back to Spain.

This was risky business. So across the street from Cortes’s home, he built, with the aid of the Dominican Friars, the humble Emrita del Rosario Church, or Chapel of the Rosary. This little white stuccoed chapel was the first and oldest church in all of the Americas, dating back to 1523. Cortes and his men would pray here, (the rosary, I’m sure) for safe passage back to Spain and pray out of gratitude when they returned to Mexico. The first Baptism of an Indian occurred here. 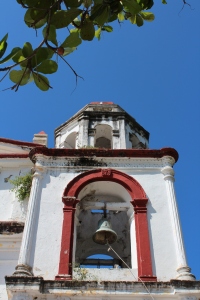 I find it interesting to note that this indigenous plant has been working hundreds of years to consume and destroy the home of Cortes, the brutal, mighty conquistador who nearly wiped out the indigenous people. This one solitary man led the conquest to defeat and conquer the Aztec Empire, just as and this one fig seed is attempting to consume his home today.

According to the National Commission for the Development of the Indigenous Peoples (CDI), thirteen percent of the Mexican population are all that remains of the indigenous people. Most are mixed with Spanish blood. They struggle to make legislative changes to preserve and promote their language and ensure economic development in their communities. The Spanish have drastically influenced Mexican culture and people. It is difficult to separate the two.

I have since learned that, contrary to how it appears, the strangler vine is not all bad. Once the host tree dies and hollows out, the cavity also provides an important home for 100’s of vertebrates, rodents, reptiles, bats, birds and amphibians. Although it looks like it is responsible for such eminent death, the fruit of the vine, delicious figs, provides an important food source to many rain forest creatures. In lean times, the strangler vines provide the only source of food for many primates and birds.

Strangler vines do not appear to be a good thing for a house, however, but my guide tells me, that if they were to hack away the vines and expose the walls, Cortez’s home would collapse, so dependent is it now on its symbiotic relationship. 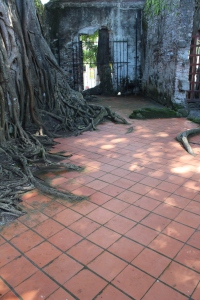