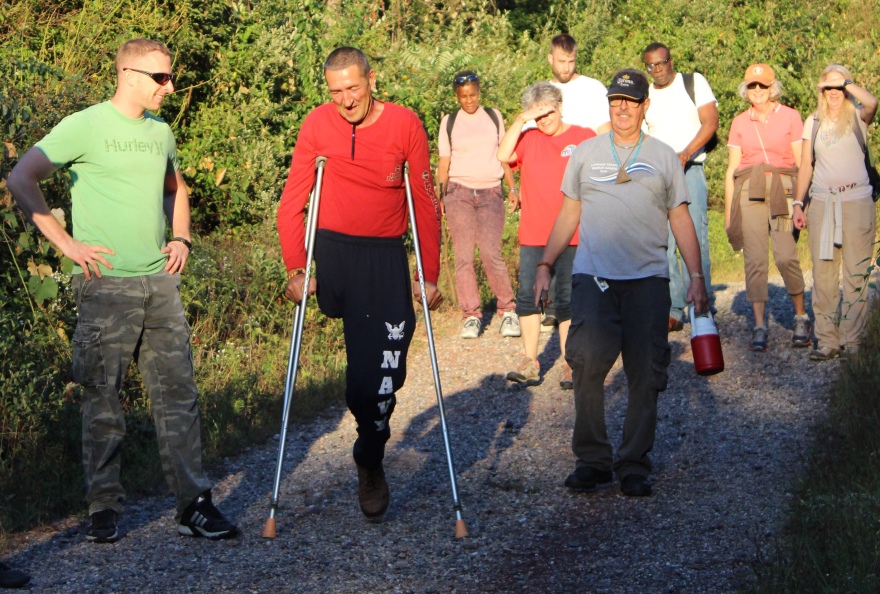 The trail was a rough one- a stream ford, climbing over moss-covered, wet slippery boulders, and incredibly steep, loose, rocky descent that people often slipped and fell on and always wiped us out when cross-country skiing. The loop hike was over 3 ½ miles long. We used that trail to train our llamas on before we left on our 500-mile, 2 month traverse of the Rocky Mountains years ago, because it has varied and challenging terrain and is a sizable length.

Last evening I was to lead a group of Veterans from the Lebanon VA Medical Center on a hike with my non-profit River House (RH) PA – sixteen Veterans who are enrolled in a resident re-hab program and their two Recreational Therapists. When I saw how young and strong most of them were as they piled out of the vans, I thought the little extra challenging hike would be good for them. Normally, I lead them along a gentle, smooth old woods road paralleling the wild & scenic Little Schuylkill River.

Until I saw Wayne step out of the van on his crutches.

Wayne was with us on two other RH events and had walked one mile on a stone road with his crutches to a swimming hole where the Vets enjoyed an inner tubing outing. We had doubts then about whether Wayne would be able to do that 1 mile fairly smooth, fairly level road, but he did extremely well. He proved us wrong.

The next outing, Wayne paddled a canoe all over Blue Marsh Lake for an evening full moon outing, but his upper body is beastly from hauling his bottom body around so we expected as much from Wayne. But on this hike, there are many two-legged folks I would never take on it. I advised Wayne’s rec therapist, Amy Cook, that the group should split up and take some along the gentle woods road. A sizable steep hill gets thrown at the hiker in the first tenth of a mile, before the trail drops down to a very slippery, wooden plank board bridge across Pine Creek. I would lead the more fit, faster gung-ho Veterans. But she shortly informed me that everyone decided they wanted to do the more challenging loop, including Wayne. Wow. OK. I was certain that once they got into the rough stuff, they would just enjoy the stream-side hike and turn around when they had enough and meet us at the vans.

I went on our merry way, chatting with Vets as they told me how great it felt to be in the woods and how beautiful it was. The evening was a beauty- 70 degree temps, color already highlighting the Appalachian woods, beautiful scenery through a hemlock and rhododendron forest, paralleling a native trout stream with deep holes and fish that swam in the shadows. Anyone would be happy here but especially Veterans involved in a rigorous therapy program.

I heard from one Vet, that he had not been OUT for two years, but stayed safe indoors away from people and potentially challenging situations. Until that evening. He wrestled with coming, not coming, coming and finally pushed out of his comfort zone and committed. I was pretty happy to share the walk with him and he was extremely happy to be there.

This is my world. One that I go to every day for a shot of rejuvenation after sitting at a computer writing all day. My husband and I are fortunate to live in a peaceful natural place on our 12 acres by the Blue Mountain. We enjoy sharing our beautiful log home and property, campfire ring and woods with Veterans who need a hand up while they work on getting better and healing.

It had been a tad too quiet around the house for me lately. I missed my grown kids. One is studying in Nepal, one is pursuing his illustration art career in Philadelphia. But Amy Cook, recreational therapist extraordinaire at the Lebanon VA promises she can bring me two vans of Veterans every month to recreate in the outdoors with River House. That makes me happy to share and them happy to get a break from the medical center.

As my group was finishing the loop and we were approaching the parking lot and the vans, I was looking ahead to see the rest of the group that had turned around when suddenly my cell phone rings. It was Annie Schnur, Board member Mike Schnur’s wife who accompanied the “slow” group.

“We are right behind,” she says.

“All of you? Even Wayne” I ask disbelieving?

I went for my camera to record this moment. The rest of the Vets that I had hiked with watched Wayne’s last steps. They applauded him as he entered the parking lot in amazement. It was a big moment for us all. 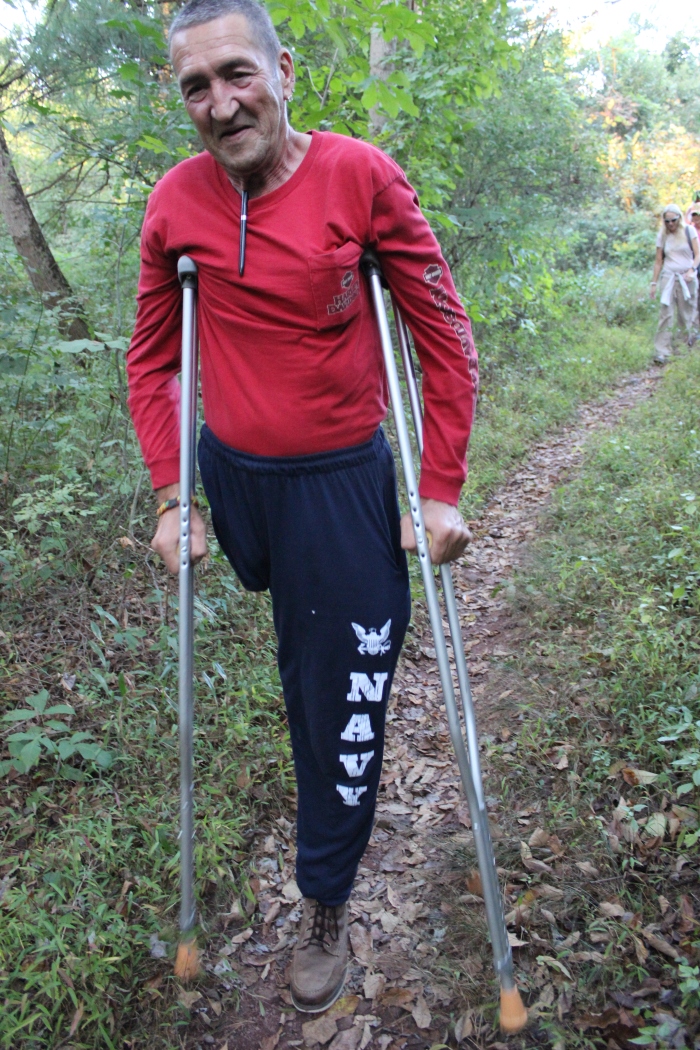 Annie shared with me some of what was happening with her group in the rear. She walked with Veteran Wanda who said that she had a very serious fall and is still recovering from her injuries so her hiking was slow but steady. At the bottom of each hill she would comically moan and groan but with the constant support of another Veteran, Darryl, she would rally her determination and trudge her way up. Actually, each one of these veterans made sure that there was no one left behind. The care they took for each other was remarkable.

Annie said that two Veterans were deep in conversation about where they are in their lives right now, what brought them there and where they want to go from here. They discussed how they had gotten sidtracked from their goals but were more and more hopeful about continuing their educations. As they finally started downhill at the end, both sounded like they could do just about anything ! Annie said that it felt so good to overhear their optimism about their futures.

Around the campfire, after dinner, Amy made a wonderful association for everyone when she pointed how the challenge and the fun that of what we all experienced had been done with out drugs and alcohol.

She then asked the Veterans to go around in a circle and share a “Gratitude” if they wanted to with the group- not mandatory. And so the speaking began. There was so much gratitude that poured from their hearts- gratitude for being alive (as some attempted suicide), gratitude for coming to a place of light after so much darkness, gratitude for a second chance, gratitude for the woods and nature and the walk as some had NEVER been in a forest before nor on a hike and many not since boyhood, and gratitude to Amy for believing in this type of nature-based therapy. I saw tears silently trickling down some of the Veteran’s cheeks as they poured out their hearts and thanked Todd and I for providing them with this opportunity.

It doesn’t feel like a big deal to us. I go for a walk every day anyway. I like to have people over and share a meal. It doesn’t matter that I don’t know these guys until they come, but then they are members of our family and are invited back, even after they leave the Lebanon VA program. But it is evidently a big deal to the Veterans. Many have trust issues and just the fact that we open up our property and lives for them, cook for them, share our time with them, give them an opportunity where they can find peace and beauty is pretty important to them.

“IF WAYNE DOES NOT SEE LIMITS, How can I?” Limits in anything in their lives, including the ability to climb out of their dark hole that have found themselves in and make wiser, more healthy choices. It was hugely impacting to us all. When it comes down to it, I don’t think WAYNE knew how big a gift he was giving to all his fellow Veterans, and anyone that witnessed what he did.

Everyone said their good-byes with a full bursting heart last night and the hopes that our paths will cross again. I distributed my River House PA calling card to everyone and told them not to be strangers. Who would have thought a few years ago that Todd and I, who have so little in common with the military and that whole world, would be in the “business” of bringing Veterans outdoors in need of healing. But we don’t need to be in THAT world with them, because that world is receding farther back in their past and the poor choices that they made are too. What we do have in common is THIS world- their new healthy world they are choosing to create for themselves. This world we can share with them because we know how to go to the wild places for peace, and we have the beautiful property to base our non profit out from. There was gratitude in everyone’s heart after warm strong embraces and the big dark blue vans pulled away in the night, on their way to healing and health and a little more confidence and belief that they can turn their lives around. Sometimes that is all it takes. Seeing a one-legged Rockstar show you how to do it.