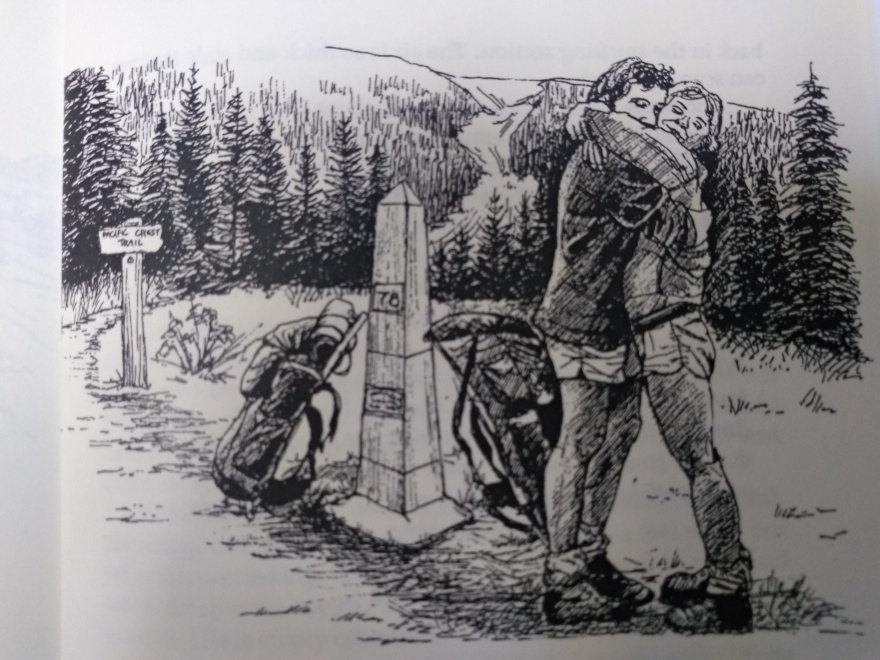 (illustration from my 6th book, “Journey on the Crest.”  Todd and I at the Washington/Canadian border.)

Todd asked if I was nervous about our upcoming long-distance hike…400 miles on the CDT from the CO/NM border south to Pie Town. Just because it has been 35 years since we shouldered our backpacks and took off on a wilderness trail for more than 100 miles, doesn’t mean we turned into couch potatoes these last decades. We just had some help, as in llamas and then mountain bikes. We are geezers now (or more accurately, a geezer and a geezette, as our son Bryce called us years ago). We sure haven’t mastered this ultra light-backpacking. I may have purchased a tiny blow up air mattress and the like, but I am still bringing along a journal and a camera. Not a SLR mind you with multiple lens, as I did on the PCT and not an 8 x 12” cloth bound sketchbook as well as a fountain pen and a bottle of ink (OMG!) My pack did weigh 70- pounds climbing Mt Whitney in the snow. I needed help putting it on and the nerves went numb in my arms for weeks after the trip was over. I like to think I am smarter now- a byproduct of geezerhood and acquiring more wisdom.

I’m not nervous, I told Todd. I told him, “Every other long-distance hiker on that trail is attempting to cover 3100-miles this summer. Our sights are set on a measly 400 miles- just one month, not six. Let’s keep it in perspective.”

“But what if we don’t like it?” Todd asked. “Well, we aren’t going to quit”, I told him.  Too late for that. The plan is already in motion. Maybe we’ll come home and buy llamas again. Maybe once we get to the Mexican border next year we will say, that’s enough backpacking, bike packing is our true and current love. (We do have a future commitment to mountain bike pack the 1700-mile Baja Divide the winter of 2021- for 1700 miles.) The idea is to keep moving. Keep having adventures. They can come in all forms.

I shouldered 40 pounds yesterday in a new ultra-light pack and hiked a few miles. The hip belt is skimpy and dug into my back. But it’s 3 pounds lighter than my other pack. “If I am carrying 35-40 and I weigh 145 pounds and you are over 200- what percentage should you be carrying to make it fair?”

“We’ll throw out the stove and not cook, “I said. “We ought to be able to survive on cold food for a few weeks. And we can go on half rations. We could both stand to lose 5-10 pounds.  If I don’t come home losing 5 fuckin’ pounds I am going to fast in the truck on the drive home.”

I reminded Todd that it was his idea to hike New Mexico since when we were llama packing it with the kids back in 1997, the trail was mostly road walk, with water sources 40 miles apart. That wasn’t happening with little kids who could only cover 10 a day and were not able to carry water for 4 days, including for our beasts of burden. So we traded our llamas and gear for tandem mountain bikes and trailers and rode the newly made Great Divide Mountain Bike Trail (GDMBT) to the Mexican border. We felt self-propelled travel was the true goal.

Since we rode the rest of the GDMBT in the last three years down from Jasper NP in Canada and my friend, Teresa Martinez, CEO of the Continental Divide Coalition, informed us that the CDT is now built through NM (expect for an 80 mi road walk) Todd said for all intents and purposes, we need to now BACKPACK New Mexico’s CDT to do it both ways. (And if I am to write a book about Circling Back to the Great Divide- mostly mtn biking it, then we gotta finish it!)

We have to figure out how to navigate with a phone AP although Todd has pounds of paper maps and print outs to make him feel more comfortable, anyway. (so much for lightweight- one compass though, not two this time!) His back is a little tight from hoisting a chainsaw like an obsessed artist for the last years. I have a tight piriformis hip rotator muscle from backpacking 10,000 miles in my past and so must keep my hip belt cinched high in my guts because I can’t put any pressure on that muscle and sciatica nerve. We’ll figure it out.

THE GOAL IT TO HAVE SOME FUN DOING IT. All I ask for is SOME FUN. I told my half-empty cup, slightly pessimistic husband, “WE HAVE CONTROL OVER OUR ATTITUDE!!! LET”S MAKE IT FUN!!”

Stay tuned. But as we always told our kids as we trekked across the CDT and many other trails all over the planet for 29 years of their lives, “It might not always be easy, but it’s always worthwhile.” THAT point is hard to argue.